Student-soldier is proud to be an American Samoan 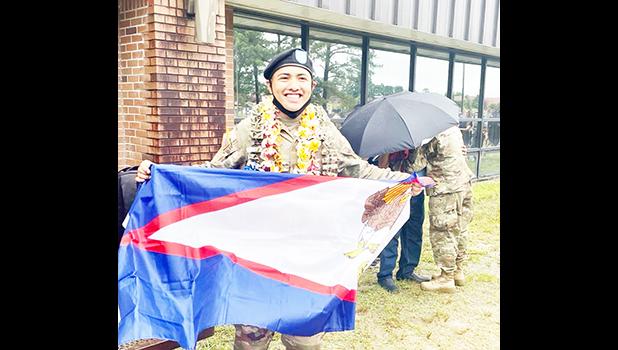 Fort Jackson, SOUTH CAROLINA — PFC Kerisiano Ricardo Castro graduated from the U.S. Army Basic Combat Training for the 2nd Battalion, 60th Infantry Regiment at Fort Jackson, South Carolina on July 8, 2021. Over the next 14 weeks, he will be completing advanced individual training for his job as a Psychological Operations Specialist with the Army intelligence unit.

PFC Castro is the son of native daughter of American Samoa Esther Sataua Castro from the village of Leone and Fagasa and Ricardo Castro of El Salvador residing in Southern California. He is the grandson of HTC Kerisiano Sili Sataua and Eseta Sataua of the village of Fagasa. He is also the great-grandson of the late HC Samana Semo Ve'ave'a and Fa'apio Ve'ave'a of Leone and Vatia.

PFC Castro enlisted as a reserve solider with the army during the COVID-19 pandemic. He is a full-time freshmen student with the University of California Riverside majoring in Microbiology and plans to go onto medical school at UCR once he's completed his Bachelors and proudly serves his country at the same time in the Army.

PFC Castro was born in California and was raised in American Samoa as a child. He attended Manumalo Elementary school before heading back to California to continue his education. He is very proud to be a Samoan and that is evident as he proudly displays the American Samoa Flag after  his graduation ceremony.