Three daughters of American Samoa honored as “Women of the Century” 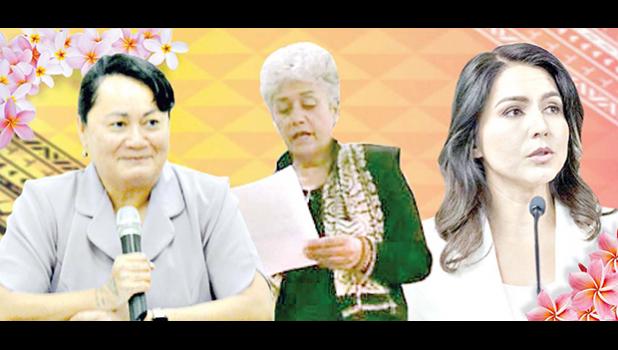 Pago Pago, AMERICAN SAMOA — In recognition of the 100th anniversary of the 19th amendment to the U.S. Constitution — granting women the right to vote — the national newspaper USA Today has been recognizing what they have dubbed “Women of the Century” for the U.S. states.

On Thursday the newspaper released their list of Women of the Century for the 5 inhabited U.S. territories. The list features women from Puerto Rico, Guam, the Northern Mariana Islands, the U.S. Virgin Islands and American Samoa. The women highlighted range from prominent politicians to groundbreaking music artists.

USA Today points out that many people born in the territories have to leave their homes and immigrate to the mainland U.S. for a better life. This ‘brain drain’ was one of the issues for discussion the Chamber of Commerce posed for the three 2020 gubernatorial candidates who attended the recent forum.

And as was pointed out during the forum, U.S.A. Today opined, “As a result of emigration, many of the territories are bereft of talent.” The paper went on to say that they made a point to mostly highlight women who stayed in their territory, “working to better the life of generations to come.”

Honoree Sandra King Young is one who didn’t succumb to the brain drain.  A graduate of George Washington University Law School, she also spent 10 years working in Washington, D.C. In 1999, President Bill Clinton appointed her Deputy Director of the Office of Insular Affairs in the U.S. Department of Interior; at the time, it was the highest position a native Samoan had ever held in the executive branch.

She chose to return to the territory in 2001 and work to better life for others. The director of Medicaid in American Samoa since 2013, King-Young has worked her entire career to help people on the island access health benefits and better education.

Prior to her Medicaid role she was the founder and executive director of Pacific Island Center for Educational Development, a nonprofit that worked directly with parents  – or the “first teachers” as they called them – to help prepare children for the SATs and college, while providing mentorship to students.

She also was the running mate of Save Liuato Afa Tuitel in the 2012 gubernatorial race.

A graduate of Fa'asao High School and Alofau Elementary School she is the daughter of the late Jake and Rowena King — both legends in the territory and former owners and publishers of Samoa News and Samoa Journal.

She is married to Peter Young of Nuu’uli and they have two sons.

Born on Tutuila, Tulsi Gabbard and her family moved to Hawaii when she was two years old.

Since 2002, she has represented Hawaii’s 2nd Congressional District in the House of Representatives and is the first Hindu to be elected to Congress, as well as the first Samoan-American voting member.

She became the first female combat veteran to run for president when she joined the Democratic primary in 2019. On March 19, 2020, Gabbard dropped out of the 2020 race and endorsed former Vice President Joe Biden.

A controversial figure, Gabbard, she was a vice chair of the Democratic National Committee from 2013 to 2016, when she resigned to endorse Senator Bernie Sanders for the 2016 Democratic presidential nomination.

Gabbard criticizes what she describes as a push by the "neoliberal/ neoconservative war machine" for US involvement in "counterproductive, wasteful foreign wars", saying they have not made the United States any safer and have started a New Cold War and nuclear arms race. She has said that the money spent on war should be redirected to serve health care, infrastructure, and other domestic priorities. Nevertheless, she describes herself as both a hawk and a dove.

Gabbard supports a Medicare for All health care plan she calls "Single Payer Plus" and strengthening Roe v. Wade by codifying it into federal law. She co-sponsored the Family Act for paid family and medical leave and endorsed universal basic income. Until 2004 she voted and lobbied against same-sex marriage in Hawaii. She publicly apologized for that position in 2012.

Gabbard voted "present" when the House of Representatives voted to impeach President Trump in December 2019.

In 2009, Gabbard graduated from Hawaii Pacific University with a Bachelor of Science in Business Administration with a concentration in International Business.

She is the fourth of five children of Mike and Carol Gabbard.

According to Wikipedia Gabbard is vegan and, as a Hindu follows Gaudiya Vaishnavism. In 2015, she married freelance cinematographer and editor Abraham Williams, the son of her Honolulu office manager, in a traditional Vedic wedding ceremony.

Gabbard announced that she would not seek reelection to the House in 2020 and since renting a house in New Hampshire there have been rumors she planned to move there permanently.

A scholar, poet, activist and environmentalist, Caroline Sinavaiana Gabbard was born in American Samoa and was the first person of Samoan ancestry to achieve the highest academic ranking (full professor) in the United States.

She taught creative writing and Pacific literature for nearly 20 years at the University of Hawaii in Honolulu. An accomplished author who has written both academic and non-academic books, her poetry collection, “Alchemies of Distance” published in 2002.

In academia, she focused primarily on Samoan/ Pacific Islander literature, mythologies and folklore and how those texts help ancient traditions and wisdom be passed on to the present day.

She is Tulsi Gabbard's aunt and the daughter of Benjamin Harrison Gabbard, Jr. and Agnes Yandall Gabbard.

She was formerly married to poet-author- folklorist John Enright.  She has one son, Liam Enright.