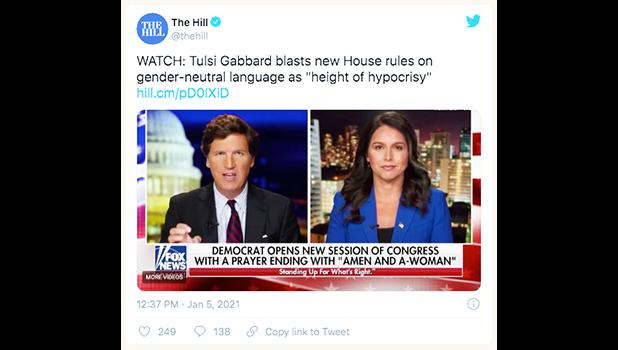 Six months after leaving her fourth term in the House and more than a year after her quixotic run for the U.S. presidency, Gabbard attacked the mayor of Chicago.

“Mayor Lightfoot’s blatant anti-white racism is abhorrent. I call upon President Biden, Kamala Harris, and other leaders of our county — of all races — to join me in calling for Mayor Lightfoot’s resignation,” Gabbard tweeted two weeks ago. “Our leaders must condemn all racism, including anti-white.”

Gabbard was reacting to Mayor Lori Lightfoot’s decision to limit for one day media interviews to journalists of color. Her remarks were criticized by some who said there is no such thing as “white culture” but embraced by the likes of Rep. Lauren Boebert (R-Colo.), best known for promising to carry a firearm into the U.S. Capitol.

The rationale of the mayor, who is Black and gay, was to emphasize the “overwhelming whiteness and maleness” of the Chicago media. The rationale of Gabbard, I presume, is to keep her name in the headlines and to curry favor with conservatives.

“Tulsi Gabbard takes a stand against woke liberal racism” ran a headline in the Washington Examiner.

She also managed to again upset groups that have never warmed to her. A writer for LGBTQ Nation noted that during her 2020 presidential bid Gabbard faced “strong criticism for her past work as a conservative activist including working for an anti-LGBTQ organization.”

The article also pointed out that Gabbard introduced a bill during her last two months in office trying to ban trans girls and women from participating in sports, “knowing it would not be considered at the end of Congress’s session.”

But where does Gabbard go from there, other than maybe hosting her own show on Fox News?

In the meantime, she continues to inspire speculation about her political future. In addition to talk that she might switch parties and run in 2024 should Trump decide not to seek reelection, Texas News Today reported that a poll from the far-right One America News found that more than 60% of people want her to replace Gavin Newsom as governor of California.