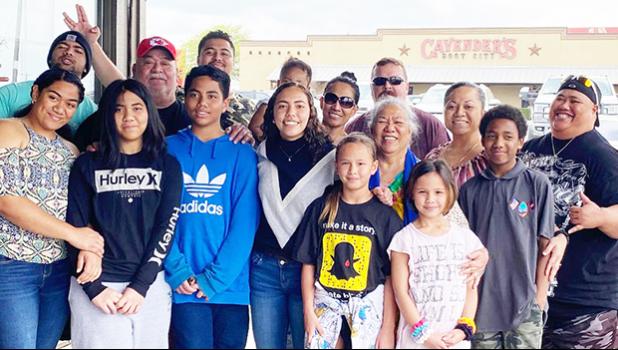 Taylor Poia Miller is set to graduate high school later this year in June. And unlike some of her peers who are still uncertain about life after high school, Taylor already knows where she’s headed.

Earlier this month on March 10th, Taylor was notified that she is among the elite group of young people who have been appointed to the United States Air Force Academy as a member of the Class of 2024.

Taylor, a Texas native — whose roots are deep in Am Samoa and Samoa — was told of her appointment via a letter from USAF Colonel Arthur W. Primes Jr. on behalf of Superintendent Lt. Gen. Jay B. Silveria (USAFA ’85).

“You will be joining a select group of our nation’s finest young people as you take this challenging and rewarding step toward becoming a professional Air Force officer,” Col. Primes Jr. wrote. “Taylor, you have earned a rare opportunity to participate in one of the country’s finest officer training programs. This appointment is awarded to only about 1,200 of our 9,700 applicants. Your previous accomplishments indicate you have the potential to meet the demands and challenges of the Academy and you should be extremely proud of your appointment as only the best of the best are so rewarded.”

Taylor was reminded that her appointment is conditional on continued excellence academically, socially, and physically. “I compliment you on a tremendous record of personal achievement and look forward to welcoming you to the Cadet Wing on June 25, 2020,” Col. Primes Jr. concluded.

Taylor was nominated for the US Air Force Academy by Texas Congressman Will Hurd. “Your achievements are impressive, and I am proud to know of a young woman with such remarkable leadership abilities, scholastic aptitude, and extracurricular talents in the 23rd Congressional District of Texas,” Hurd wrote in a Dec. 18, 2019 letter to Taylor. “You have worked hard to get to this point, and it is well deserved. I look forward to hearing about your many future accomplishments in the years to come.”

Taylor with her grandparents are Sa’ousoalii and Poia Maafala. [photo: courtesy]

Taylor is the daughter of Bret Miller and Lina Maafala of Aua, American Samoa; and Leulumoega and Malie, Samoa. Her grandparents are Sa’ousoalii and Poia Maafala.