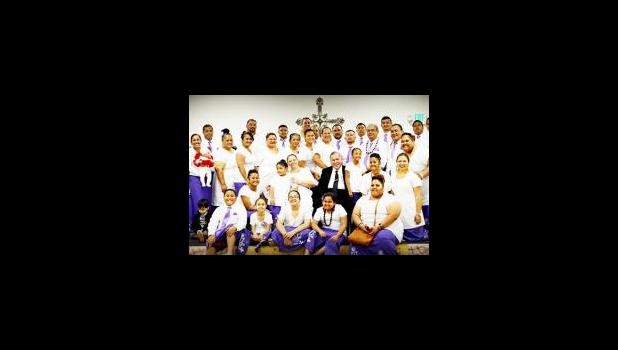 The Samoan Congregational Christian Church of Ft. Hood, TX celebrated Easter this year by dividing their church up into three groups: Mataio, Mareko and Luka. Each group was under the supervision of a Lay Minister: Mataio – Ioane Savai’inaea, Mareko – Leasina Lefotu, and Luka – Teuimaota Sasa.

Each group re-enacted part of the last day of Christ’s life on Earth. Team Luka did the Last Supper and Gethsemane, Team Mareko re-enacted the trial and persecution of Jesus and Team Mataio did the crucifixion. They did it through songs, skits and dances.

The night began with an upbeat number by Team Luka. Then Team Mareko gave a powerful re-enactment of Jesus’ trial. It ended with a moving dramatization of Mary burying her son and singing a song for him for Team Mataio.

Although the mood was somber on Good Friday, each group was decked out in their colorful group uniforms that gave a festive tone to the service.

Team Luka wore the traditional purple of Easter, while Team Mataio chose red because of the blood that was shed on the cross for us. Team Mareko chose an island elei print for their uniform.

At the conclusion of the service Rev. Menise Sasa, the pastor of the church, thanked each group for putting on their part of the program. He said it’s important for us to commemorate our Lord’s last moments on earth so we never forget the sacrifice that was done.