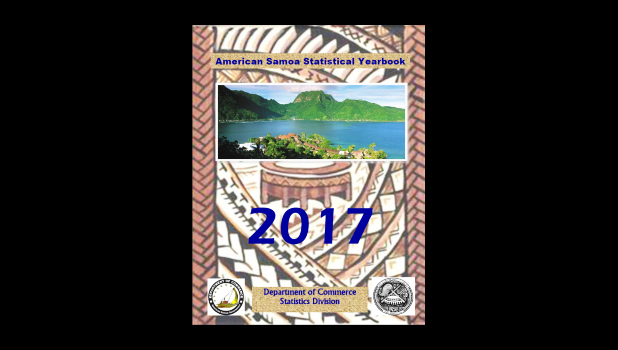 Pago Pago, AMERICAN SAMOA — The American Samoa Statistical Yearbook for 2017 is now released and highlights are as follows:

The number of births has declined immensely since 2012 except for 2015, which had a slight increase of 12 births. Total births recorded in 2017 was 1,001 while total deaths was 310 resulted in a natural growth of the resident population of only 691. LBJ Medical records recorded six infant deaths in 2017.

There were 109 educational institutions including ASCC, with enrollment recorded at 15,967 students. School enrollment has dropped significantly since 2013. The number of teachers in public schools also dropped in 2017. The highest drop was reported for Elementary Schools.

About 82 percent of the population 25 years and over graduated from a High School while only about 10 percent had a bachelor degree or higher.

All offenses reported to the Department of Public Safety dropped by -0.7 percent in FY2017. Burglary (although with a slight drop) continued to be the number one offense in Part I Offenses while Robbery and Larceny are on the rise again. On Part Two Offenses, Disorderly Conduct followed by Property Damage/Vandalism reported as the two major community complaints.

DUI dropped by over 50% when compared to 5 years ago but Narcotic cases doubled in the same period.

Likewise, the number of cases report in Family/Children has gone up as well.

Most sternly, the number of Weapons incidents reported to DPS continued to increase from year to year.

In 2017, 71,592 people arrived in the Territory and 74,987 departed given a net loss of 3,035 people.  Most incoming travelers were returning residents while visitors accounted for 38 percent. New Zealand is the primary tourism market holding 42 percent of the market. The United States followed with 39 percent and Australia with 10.8 percent.

Federal grants accounted for 65 percent of all government revenues while 34.2 percent came from local taxes. Of the total expenditure, 26.7 percent were spent on Education and Culture followed by Health and Welfare with 21.4 percent and General Government with 18.4 percent.

Total employment in 2017 amounted to 16,408 with 35.6 percent working for the American Samoa Government and its four Authorities, 14.1 percent worked for the canneries, and 50.3 percent worked in the rest of the private sector.

Cost of goods sold and services normally purchased by the community went up in 2017, with an average inflation of 3.6 percent.

Recent Gross Domestic Product estimates released by the U.S. Bureau of Economic Analysis valued the local economy at $634 million at current prices. The 2017 GDP at constant prices (i.e. price changes removed) amounted to $598 million compared to $632 million in 2016; a decline in the local economy of 5.4 percent.

For more information, contact the DOC Research and Statistics Division or the government agency cited in the source references. Click to download electronic copy of the 2017 Yearbook.