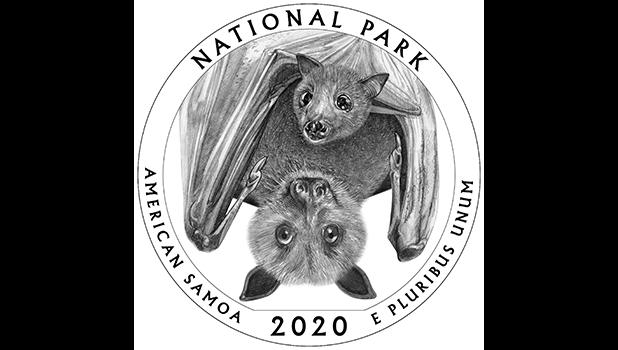 Washington D.C. — A quarter honoring the National Park of American Samoa is part of the federal “America’s Beautiful National Parks Quarter Coin Act of 2008” which honors national parks across the US.

According to the US Mint, the designer is Richard Masters while the sculptor-engraver is Phebe Hemphill.

“Mr. Masters’ design depicts a Samoan Fruit Bat mother hanging in a tree with her pup evoking the remarkable care and energy that this species puts into their offspring,” according to the US Mint. “The design is intended to promote awareness of the species’ threatened status due to habitat loss and commercial hunting.”

The National Park of American Samoa is the only park in the United States that is home to the Samoan fruit bat.

In 2010, the US Mint began issuing 56 quarter-dollar coins featuring designs depicting national parks and other national sites as part of the United States Mint America the Beautiful Quarters Program.

(Samoa News should point out the irony of the release of the coin with a design “intended to promote awareness of the species’ threatened status due to habitat loss and commercial hunting” — as the Trump Administration announces new rules that will weaken protections in the Endangered Protection Act.)

The last time a quarter coin was released for American Samoa was on Sept. 3, 2009, when the American Samoa commemorative quarter-dollar coin was launched in the territory, and then Gov. Togiola Tulafono led a local delegation to the ceremony.

That quarter, tail side, was sculpted by US Mint Sculptor–Engraver Charles L. Vickers,  and featured the ‘ava bowl (“tanoa”), whisk and staff in the foreground, with the shore featured in the background.  Inscribed on the coin’s reverse are the words: “AMERICAN SAMOA” and “SAMOA MUAMUA LE ATUA” which means “Samoa, God is First.”