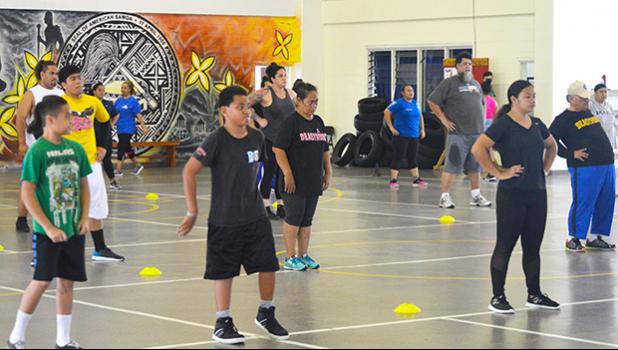 Pago Pago, AMERICAN SAMOA — October is Breast Cancer Awareness Month, an annual campaign to increase awareness of the disease. And a local non-profit organization called, “30-30 Strong American Samoa” is conducting a supplemental program, not only to help encourage people to live a healthy lifestyle, but also to promote the theme: “Live a Healthy Living”.

The organization was formed late last year with only 15 members in the group, under the leadership of president, Jonathan Fanene, who is also the Director of the Department of Youth and Women's Affairs. Today, almost 100 members have joined the group, and according to Fanene, the number is growing everyday with members ranging in age from 8 to 81

According to Fanene, this was the vision of Governor Lolo Matalasi Moliga, not only to conduct health programs for everybody in the territory to take part in, but also to promote a healthy lifestyle for our people so they can change the way they eat and drink everyday.

“This is all about healthy living, and the program is not specific to a group of certain people. This program is open for everybody. If you want to live a healthy lifestyle, feel free to join us. Our certified instructors will provide different styles of exercises for you everyday, and it will help you change your life,” Fanene said.

The training exercise is held at the DYWA gym in Pago Pago from Monday through Friday, 4:30p.m - 5:30p.m.

According to Fanene, not only does the organization promote the prevention of breast cancer, they will also present a monetary donation to the American Samoa Cancer Coalition today.

The donation will show that not only do they fully support those living with breast cancer, but also honors those who lost their battle to the disease.

“The donation we are about to present today is not about the organization, it's about those lost their lives and those who are still fighting breast cancer. We want to show the territory that we do care and we want to show our support. At the same time, we’re asking our people to please, join us and be part of this life changing program. Not only is it good for your health, but it will also encourage others, including your family members, to start living a healthy lifestyle,” Fanene concluded.

Samoa News was able to hear from some people who have been with the organization for more than 5 months, and the changes they have seen in their lives.

According to a 52-year-old father of five, he has always struggled greatly with low self-esteem, clinical depression, mood disorder, and severe anxiety, as well as alcoholism in the past.

“These have been exacerbated by working too much, putting too much pressure on myself, not taking care of my health, along with other external stressors,” he said.

According to the man, at times, he became so stressed out, depressed, and chemically imbalanced that he was incapacitated and couldn’t get through with normal daily activities. He said he nearly committed suicide before taking himself to the emergency room.

“Ever since I joined this group almost 6 months ago, I have seen changes in my life. I had to slowly start out doing exercises with other people, sometimes I walked one to two miles by myself. I eventually progressed to running up to one mile. This helped to boost my natural endorphin production, which in turn helped my mood. The exercise helped save my life.” he said.

Nancy Williams, 38, a teacher of 8 years told Samoa News that the exercise really helped save her life by naturally reducing stress, improving her breathing abilities, balancing her body’s chemical make-up, and also clear her head.

“I’ve learned the hard way that you need to ask for help when things aren’t going well. If you want to change the way you live, not only do you need to change your diet, you also have to seek help from those who have experienced a lot of changes in their lives because of these exercises,” Williams said.