$685,000 allocated to Am Samoa to combat violence against women 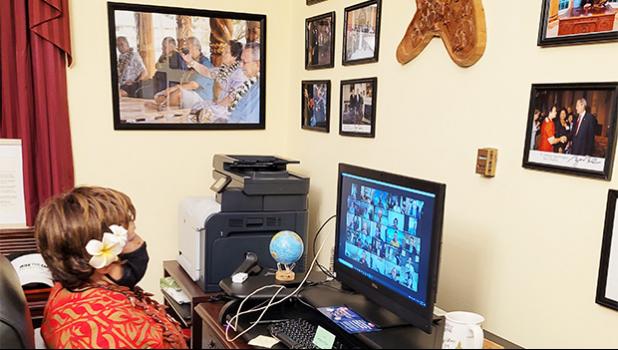 Washington, D.C. — Wednesday, Congresswoman Uifa’atali Amata welcomed the announcement of over $685,000 in federal funds for American Samoa’s efforts to combat violence against women. These federal funds are from two grant programs administered by the Office on Violence Against Women (OVW) of the US Justice Department.

The first grant of $616,964 is from the STOP program (Services, Training, Officers, Prosecutors), which provides funds to states and territories to improve how their justice systems, including police officers, prosecutors, and the courts, support the victims of violent crimes against women.

The second grant of $68,933 is from the Sexual Assault Services Formula Program. It provides federal supplemental funding to rape crisis centers and non-profit, non-governmental organizations that provide services and assistance to victims of sexual assault.

“I congratulate Governor Lemanu, Lieutenant Governor Talauega and the hardworking people of ASG for their efforts to secure this funding. I also thank Attorney General Merrick Garland and OVW Director Allison Randall for recognizing our Territory’s work on this issue.”

Congresswoman Uifa’atali Amata took part in a markup of the House Veterans’ Affairs Committee (HVAC) to develop the Department of Veterans’ Affairs (VA) portion of the reconciliation bill, S. Con. Res 14, the Concurrent Resolution on the Budget for Fiscal Year 2022. Congresswoman Amata urged more attention on Afghanistan Veterans, and advocated a specific outreach plan to ensure they are fully made aware of all the VA care and benefits that they can access.

The Committee’s work this week is one part of developing major legislation, in which House and Senate majority leadership has proposed $3.5 trillion in federal spending. That bill is being developed in various Committees in the House of Representatives, while additional discussion and negotiation is underway throughout Congress on the final scale of the bill.

In a series of often party-line votes on Monday, the Committee accepted and rejected various amendments to ultimately set funding within the bill for the VA. The Republican minority repeatedly argued for more clarity and accountability within the bill’s broad instructions to the VA to ensure the best use of new funding, during a time of already historic federal appropriations.

“Many of our brave Veterans who served in Afghanistan at any point in the past 20 years are feeling deep heartache or other emotions and reactions because of events during the U.S. withdrawal, and I continue to urge the VA to ensure they know all the possible care and services available to them,” Amata said. “I support thoroughly funding the VA to fulfill our national commitment to our Veterans, along with oversight on behalf of the Veterans they serve.”