UPDATE: Lemanu-Talauega and team look to the future govt 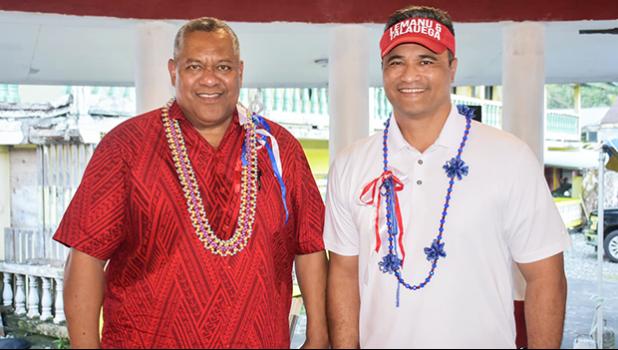 Pago Pago, AMERICAN SAMOA — Governor-elect Lemanu Peleti Mauga urged the team’s campaign committee during a meeting last Thursday evening to put the elections behind them and come together to reconcile with their families and friends.

Before Lemanu addressed the Lemanu and Talauega Campaign Committee for the first time after winning the gubernatorial election last Tuesday, Rev. Patolo Mageo led the meeting with a prayer and a short message from the Bible.

Rev. Mageo of the Pago Pago CCJS counseled the winning team to remain humble and have God lead their way.

“Expect the unexpected and when the Lord gives you the chance to lead this government — stay humble and remember that this Island is not a government, but it is a brotherhood and a family,” he said.

Addressing the audience, Lemanu says there are no words to describe days like Tuesday last week — Election Day. He pointed out that the main goal now is to develop the government and he gave thanks to the public for their prayers.

He thanked other gubernatorial teams for their challenge and offered them his congratulations for a peaceful election this year.

Lemanu said families have been divided because of the campaign and now that the elections are over, it was a time to begin the healing and mending process among families.

“Let us continue to humble ourselves and continue to work together for a better future for our nation and our people,” Lemanu said.

“Remember when we started we said focus on your families. If you have a dollar and plan to donate it to the campaign, we said your family comes first. The campaign will forge on.

“There is nothing to worry about. The election is over and God’s will has been shown through the people’s vote. We all knew from the beginning that it was not an easy task but we worked together and put our trust in God knowing that He will do His own will. So, this is our victory from God.”

He thanked everyone for working together throughout the whole campaign. He also thanked committees from each village for their hard work.

He told the audience that on Wednesday after the election, he received phone calls from several people who offered congratulations for their victory, Among those who called him were Samoa’s Head of State and Prime Minister.

Residents stuck off island due to the COVID-19 pandemic also called him to congratulate their team for the victory.

“Despite the fact that we sailed through rough seas, God has answered our prayer. Let’s work together to build our nation and bring everyone together as one family,” Lemanu said.

Lemanu echoed statements by Paramount Chief Mauga Tasi Asuega that part of restoring unity is to remove the campaign boards and signs by the roadside. For stickers and wraps, he advised “if it makes your family happy, it’s up to you but if it doesn’t appeal to your family or the public it’s better to remove them.”

Lemanu urged supporters to keep the peace and restore unity in  families because he said in the end, the individual goes back to his family.

The governor-elect gave a glimpse of a schedule of events, post election.

He said first is the week of thanksgiving, followed by a week of healing and then a week of resting, stressing that the most important of these was the time for healing.

Lemanu informed the committee that he and Lt. Governor-elect Talauega and Campaign Committee Chairman Malemo Tausaga plan to meet with Governor Lolo Matalasi Moliga this week to discuss some of the issues as they prepare to lead the government for the next 4 years.

He told the campaign committee that a major task ahead is the transition from the current to the new administration and he wants everyone to work together for a smooth start as they begin to lead the way forward.

Lemanu told committee members that whoever wants to volunteer for the transition committees should choose which department they want to be assigned to for this purpose.

So there’s just one month and a few weeks to plan before the January 3rd inauguration.

Wrapping up his speech, Lemanu said he and the Lt Governor-elect and their wives and children thank all of the leaders and members of the committee for their hard work and count on their support as they take the reigns of government.

“We started this together and we will carry our government forward,” he said.

Jokingly he said, “Please give us a week to familiarize ourselves with our jobs before you come and visit us. Don’t come the day after inauguration and say you want to be a director.”

He thanked the committee especially committees from each village for their hard work and noted that the government will only succeed if it’s led with love and humility.

Lemanu said that everyone has made mistakes in the past and at times they aren’t even aware of the mistakes. However, of most importance is that the mistakes and errors made will result in fresh and new ideas to lead the government into the future.

He told supporters to continue to remain humble and at the same time show some love for their brothers and sister who were on other teams.

“We’re all one family and if you encounter your brother or sister in public, offer them some love and tell them, brother, sister, I love you,” Mauga said.

Mauga also thanked the never-ending support by people of other nationalities like Fiji, Tongan, Philippines, Chinese, Korean, Samoa, etc, for helping out throughout the campaign. He told them that everyone who lives in American Samoa are called ‘family’.

In summing up his speech, Mauga advised everyone to make sure by the end of Friday (last week), all of their team’s campaign signs are taken down to show their humility and respect to the other teams.

“The election is over and we’re now going back to our villages and family to build up our nation with love and respect,” Mauga concluded.

Campaign chairman Malemo echoed Mauga’s speech and told the audience that their win is from God because they worked very hard since the beginning of their campaign until the last minute before the election.

“We have been traveling on a rough road. We faced many challenges but we overcome all challengers because of our team work. So God has answered our prayers and showed His will through the people’s vote,” Malemo said.

Malemo told Samoa News after the gathering that he was impressed with the election results from all polling stations.

“The idea of winning a big challenge like this year’s election is for you to have a solid plan and to work together as one team,” Malemo said.

He said that all committees took their role seriously throughout the whole campaign and did their best to win this year’s election. He told Samoa News that the key role in winning this election was hard work.

“You’ve got to have a master plan to come up with a huge win like this and you have to execute that plan so that you will get the result you’re looking for,” Malemo concluded.