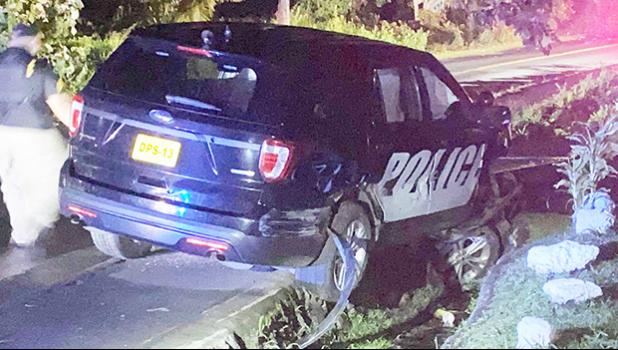 Pago Pago, AMERICAN SAMOA — Several senior officials at the Department of Public Safety (DPS) have voiced their concern regarding an incident early Sunday morning at Vaitogi when a cop allegedly cocked a rifle pointed at bystanders who were trying to help an officer who was injured when the police vehicle he was in ran off the road and went into a ditch.

Two senior officials within DPS told Samoa News this week that the officer who drove the police unit (DPS 13) that crashed has also been involved in two other separate car accidents, all involving DPS police units, but nothing has been done to address the issue.

People who were at the scene during the accident told Samoa News that cops aimed guns at people who rushed to offer help and rescue police officers after the accident.

A caller, who contacted Samoa News about the accident, said that people of Vaitogi who lived near the area where the accident took place rushed to the scene to help after they saw that one of the occupants was injured.

The rescuers were shocked when another officer got out and was walking around holding a gun aimed towards people — the same people who were trying to help the cop who was injured.

The caller told Samoa News that cops take an oath to protect the people but what these rescuers experienced with the gun-toting cops on the weekend did not make them feel safe. The caller further stated that the police unit was in pursuit of a Titan truck that was heading from Vaitogi village towards the intersection with Iliili when the police vehicle skidded off the road and crashed into the ditch.

These comments from members of the public have not been confirmed or denied by the DPS.

In addition, Samoa News sought comments from Police Commissioner Le’i Sonny Thompson via email but he did not respond as of news time.