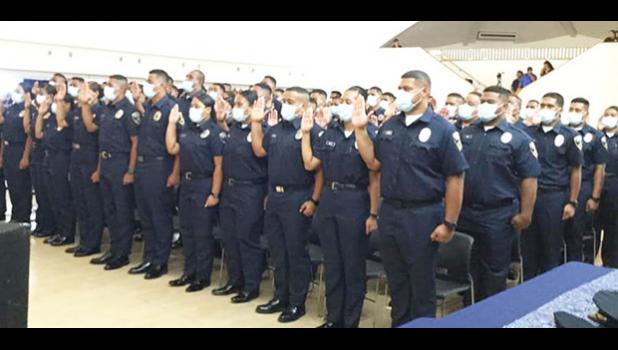 Gov calls on them to “always show respect”
By
Samoa News staff
reporters@samoanews.com

Pago Pago, AMERICAN SAMOA — Seventy-two cadets from the 28th Police Academy took the oath of office to become new police officers for the Department of Public Safety during a packed graduation ceremony at the Gov. H. Rex Lee Auditorium.

Gov. Lolo Matalasi Moliga, his cabinet members, ASG officials along with family members and supporters of the new police officers witnessed this past Wednesday the graduation ceremony, which is the 4th police academy under the Lolo Administration.

In his remarks, the governor expressed appreciation to the rank and file officers who have served in the force for many years — thanking them for their continued service to protect the community. He noted that while the police service may not be 100% perfect residents are protected and the community is living free and happy because of police work, which is not an easy task.

To the graduates of the 28th Police Academy, the governor pointed out that current officers have already laid the groundwork and path for the new officers to follow and urged them to continue the tradition of protecting the safety and freedom of the community.

While there are trouble makers in the territory, the governor pointed out that the people of the territory are protected by police and he called on the new officers, during their police work to always show respect, and respect senior citizens of the territory, in their role of protecting the community.

According to the governor, the role of community protection is not new to Samoans as this has been the way of life for many years through village aumaga; however, some villages don’t have aumaga, and therefore depend on police for protection.

Lolo expressed appreciation to Police Commissioner Le’i Sonny Thompson for his diligent leadership, which resulted in many changes to DPS, such as new buildings, upgrades to current facilities and other achievements.

He said the highest achievement made to the police service through the Police Commissioner’s leadership is upgrading the pay scale to where they are today. For example, previous salaries for a new officer were $9,000 but with the current change, a new officer who graduates from the police academy starts at $16,000.

He says the new starting salary not only helps take care of families of the officers, but also shows the importance of police work.

Chief Associate Judge Mamea Sala Jr, administered the oath of office to the new officers. It was also announced at the ceremony that police officer Scotland Elisara - is the 28th Police academy’s valedictorian while Police officer Margaret Su’a, the salutatorian.

Also part of the ceremony was the announcement of promotions for current senior officers in the police force.