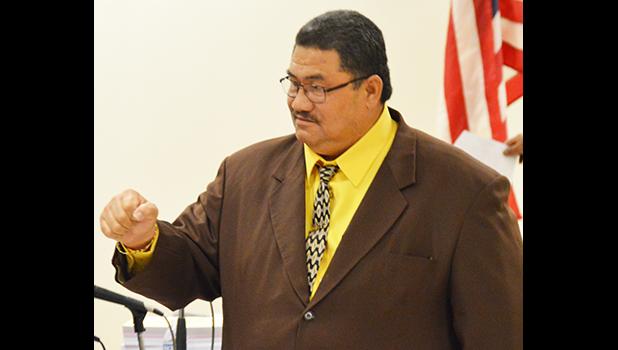 Vice speaker reveals he had no idea that he sponsored two of them
By
Ausage Fausia
ausage@samoanews.com

Pago Pago, AMERICAN SAMOA — Vice Speaker of the House, Rep. Fetu Fetui Jr confirmed to Samoa News that a list of Asians, who have been issued permanent resident ID cards even though they have not lived in the territory for the requisite 20 years, has been compiled and includes two people who are allegedly under his sponsorship.

However, he made it clear to Samoa News that he had nothing to do with this alleged scam to improperly grant permanent residency and whoever is behind this illegal action needs to be brought to justice and prosecuted.

“I want to see justice in this case because our own people are violating the law,” Fetui Jr said.

“I want people to know that once a law is in place, everyone needs to comply with the law including us lawmakers. We need to set a good examples for our people and our young children so that when they grow up, they follow our footsteps,” the Manu’a #1 Representative said.

A source told Samoa News that when the Vice Speaker brought up this issue during a House Legal Affairs & Judiciary Committee hearing two weeks ago he did not know that two out of five people whose names are on the list are sponsored by him (Fetui Jr).

Government officials who appeared before the House Committee that day included the Attorney General, Mitzie Jessop Taase and Fanene Edda Wyberski, chair of the Immigration Board.

When asked by Samoa News for a comment, Fetui Jr said that he just found out about the list when he received a copy of it and noticed that two of the Asian persons on the list are under his sponsorship.

“As I mentioned to the Attorney General and the Immigration Board chair during our last meeting, the Fono has received numerous reports of unlawful actions and dealings occurring at the Immigration Office,” Fetui said.

“As a lawmaker and a leader, I don’t want this type of unlawful action to continue to happen within our Immigration system. They are the ones who protect and control people from entering our borders and to make sure everyone is complying with our laws.”

Fetui Jr said that he loves everyone who enters this territory seeking a better future for their families and children. Whether they’re from Samoa, other Pacific islands or even other parts of the world including Asian people, they’re all God’s children and we must treat them with love and respect.

“I love these people but that doesn’t mean that I will ignore the law in order to show favoritism. I want to know who is involved in these unlawful actions and I want these actions to be stopped,” he stated.

“I remember I told the Attorney General that these actions were before her time but are still happening. And I had a list of Chinese nationals who possess permanent [resident] ID cards but they have not lived in the territory for 20 years,” Fetui Jr said, recalling his statement to the Attorney General during a house committee hearing two weeks ago.

Fetui Jr did not recall the exact date the two Asians people who are under his sponsorship entered the territory, but he’s sure that they have lived here less than 20 years.

When asked about his reaction when he first saw the list and found out that two of the people on the list are ‘his’ people — Fetui Jr stated to Samoa News, “I didn't believe it when I first saw the list and the first thing that came up into my mind is to find those who were responsible for this unlawful action and to make sure something is done to stop it.”

There were also rumors circulating that there were huge amounts of cash allegedly involved when these permanent resident IDs were issued. When asked for a comment, Fetui Jr said that he had heard the same rumors, and he had already advised the Attorney General to conduct an immediate investigation within the Immigration Office.

“I’m so upset and disappointed if these allegations are true. This is a very serious matter and something needs to be done. I’m getting tired of these things and I fully believe that the only way to put a stop [to it] is to conduct an investigation. And if it turns out to be true, then prosecute everyone who is involved,” Fetui Jr. said.

“I believe that now is the time to fix the problems at the Immigration Office, because if not now, then when? And if not them, who will?”

When this matter was first brought up during a House Committee hearing two weeks ago, the AG expressed surprise at what she was hearing and told committee members that she was not aware of this.

She further stated that all applications filed in 2019 have now been reviewed and processed. She then asked the Vice Speaker to provide her with the list he has of people who have been in the territory for less than 20 years and have already received their permanent residency ID so that she can look into it before determining the next move.

The Vice Speaker assured the AG that he would provide the list he was referring to in his statement.

He also told the AG that she may have signed some of the applications unknowingly and it was not her fault. He further said that this is a very serious matter and the AG needs to address it.