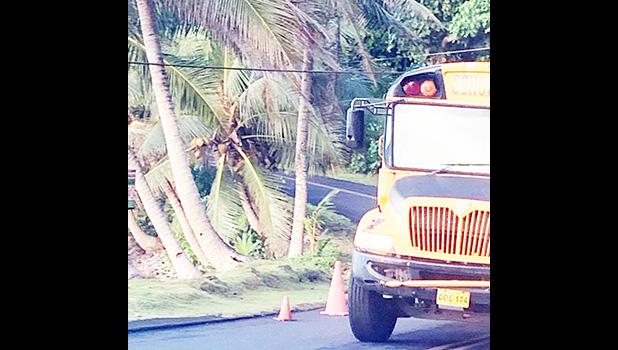 Pago Pago, AMERICAN SAMOA — A second status conference hearing is scheduled for this afternoon at the federal court in Honolulu regarding a emergency motion for temporary restraining order  (TRO) and for a preliminary injunction for AST Telecom d/b/a Bluesky Communications to immediately remove hazardous low hanging telecom cable that is “immediately a real threat to safety and property” in Alega village.

The motion was filed Wednesday by plaintiffs — Steven Jay Pincus Hueter, Rosalia Tisa Faamuli, Michael S. Kirk, and Faamuli Pete Faamuli — as part of their ongoing lawsuit against AST Telecom, which is accused of, among other things, violation of federal law by improperly hanging and attaching its telecommunication cables on trees and land belonging to the plaintiffs in Alega village and on the official private Alega Marine and Wildlife Sanctuary and Reserve.

In their TRO and preliminary injunction motion, plaintiffs said that on May 18 and May 19th, they had informed attorneys for the defendants — which include current and former AST Telecom executives —  regarding the low hanging cable in Alega on the main highway between poles 3 and 4,  and demanded immediate removal of the cables.

Plaintiffs also claimed that the low hanging cables were hitting buses and low enough to hit passengers riding in the back of trucks.

One of the plaintiffs observed that there is an emergency because of a low hanging cable had come loose/detached. Plaintiffs claim that Bluesky had promised to remove all hanging cables by May 11th and it was not done.

Plaintiffs maintain that the defendants have been in clear, obvious, knowing, intentional, willful, flagrant, callous, indifferent, and disrespectful violation of federal and local laws, rules, and regulations, and have a hazardous infrastructure, including low hanging telecom cables that are hit by passing vehicles in Alega and on the private Alega Marine Protected Area for years.

A hearing on the TRO and preliminary injunction was held yesterday presided over by US District Court Chief Judge, J. Michael Seabright.

According to court records following the hearing, which was held telephonically, the defendants’ Honolulu-based attorney Christian K. Adams of the law firm Adams Krek, LLP is “to update the Court on whether there is a problem, and if so, what is being done about it?”

Seabright then scheduled a further status conference hearing this afternoon.

Meanwhile, Seabright has granted the US Federal Communications Commission’s request for additional time – up to June 17th – to submit a response indicating whether it intends to participate in this case as an amicus curiae, or friend of the court.

FCC informed the court that it has been working on this matter in coordination with the US Department of Justice, which would need to authorize any potential participation, and the FCC will inform the Court of its final decision as soon as possible.

“However, it is likely that the agency will require additional time to obtain the approvals needed to make a final decision,” the FCC request states.

On April 13, the Court issued an Invitation for the FCC to participate as amicus curiae (ECF No. 44) in the above-captioned case.