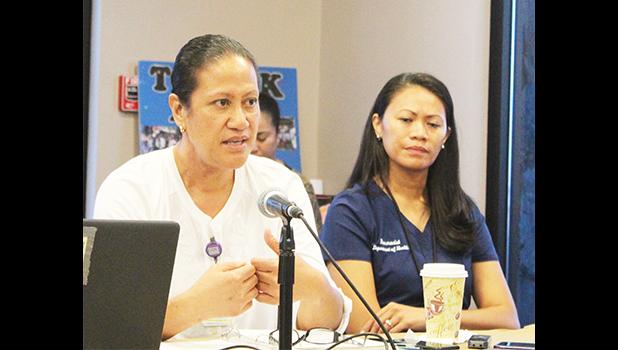 Pago Pago, AMERICAN SAMOA — The second COVID-19 test for all passengers who arrived on the Sept. 13th flight from Honolulu has come back negative and, meanwhile, they all remain in quarantine, according to Health Department officials during a news conference yesterday providing the latest update on the travelers and other DoH issues.

As for the local resident who also arrived on the Sept. 13th flight and tested positive last week Thursday for COVID-19 — the passenger remains in isolation at the Alternative Care Facility Building 2 at Tafuna and is doing well.

The only symptom that the traveler has reported to the nursing staff this week is “loss of the sense of smell,” DoH’s Clinic Service acting director Dr. Elizabeth Lauvao said in the news conference, noting that this is an usual symptom for those who tested positive but have been fully vaccinated.

(The traveler had been fully vaccinated before leaving Hawaii.)

Dr. Lauvao also said the rest of the passengers from the Sept. 13th flight — there are 217 people quarantined at Tradewinds Hotel and now 42 at Sadie’s by the Sea hotel — had their second COVID test on Monday and all came back negative.

DoH senior epidemiologist Dr Aifili Tufa noted public concerns over the virus spreading to the community from the traveler, who tested positive. However, he said, “we’re able to contain the virus” within the bubble through the quarantine process as well as the immediate isolation of the passenger.

Responding to a media question, Dr. Tufa confirmed that the “test sample” from the passenger that tested positive will be sent to the US for a variant test, saying that DoH doesn’t have the capability here for this specific test.

He said they are working on getting the test sample out on either the weekend cargo flight, the next commercial outbound flight on Hawaiian Airlines next week Monday, or any possible flight. He said the test sample will be sent to the Hawaii State Laboratory for testing and it should take about a week to receive the results back.

Dr. Aifili also shared data on the number of tests conducted since March of last year, where just over 12,300 tests were done with seven coming back positive, including the Sept. 13th passenger.

He explained that the other six positives, were crew members of vessels that passed through the Port of Pago Pago and these individuals are considered “positive transiting” cases.

(Samoa News also notes that these transiting cases — or crew members — remained on their vessels and never came on land.)

Asked about the already planned commercial flights between Honolulu and Pago Pago, Health director Motusa Tuileama Nua said the Sept. 27th flight is still operating as set, but the decision on future flights is a decision to be made by the COVID-19 Task Force.

For inter Samoa flights, Motusa said the task force during a briefing yesterday morning, has approved resuming for flights on Wednesday and Fridays. This week, the flight will operate today, but the flight for Friday, Sept. 24th from Pago Pago, is postponed to next week.  Motusa emphasized that issues pertaining to policies come from the task force, while the role of DoH is on the medical side.

Samoa government’s National Emergency Operation Centre (NEOC) announced early this week in Apia about the nationwide lockdown for the COVID-19 mass vaccination campaign scheduled for Sept. 23 and 24 in Samoa.

Samoa News will report later this week on the rest of the issues covered at yesterday’s DoH press conference.