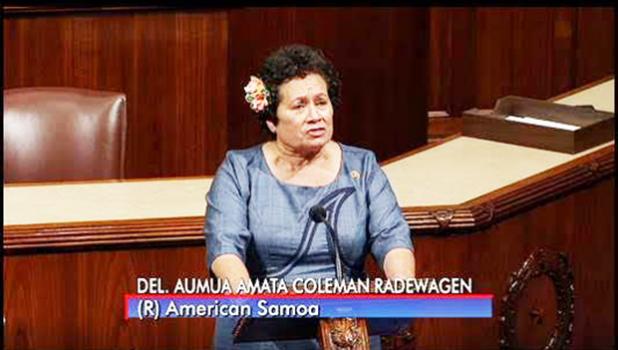 Washington, DC — Congresswoman Aumua Amata has been appointed to serve on the President's Advisory Commission on Asian Americans and Pacific Islanders (AAPI). In January, the White House announced the appointments of 12 individuals for the Commission.

Amata is the only Commissioner living in a U.S. territory, and the only one currently living in the Pacific region beyond the west coast of the United States. She also is pleased to welcome the appointment of Papaliitele David Cohen, former Deputy Assistant Secretary of the Interior for Insular Affairs, to the same Commission.

"I'm humbled to accept this appointment by the President, and I think it's important to be a voice on the Commission that knows American Samoa, the Pacific islands and the U.S. territories," she said. "I look forward to focusing on the many issues of importance and shared priorities of our large nationwide community of Asian and Pacific Islander Americans. I want to thank the President for this opportunity to serve, and for his selection of a group of knowledgeable friends and colleagues on the Commission with a wide array of expertise. I also am delighted with the selection of  the Honorable Elaine Chao as co-chair of the White House Initiative on Asian Americans and Pacific Islanders."

This is the second time Amata has been called on to serve in this way by a President of the United States. In 2001, she was also appointed by President George W. Bush to the President's Commission on Asian Americans and Pacific Islanders, within which she chaired the Community Security Committee. At that time, Amata was the only Pacific islander on that 15-member commission, which advised President Bush on AAPI issues and issued a landmark report on the health care needs of America's AAPI communities.

These appointments and activities continue a long track record of involvement in Asian American and Pacific Islander communities. Over the years, Amata has been a featured speaker at various Asian Pacific American Heritage observances, such as those at military bases in the contiguous 48 states and Europe.

In 2003, she became the first Pacific Islander chosen as Outstanding Woman of the Year by the National Association of Professional Asian American Women (NAPAW).

In 2008, she received the International Leadership Foundation’s Visionary Award, and in 2013 was presented the Inspirational Speaker Award at the Ninth Annual Samoan Athletes Heart of Champions Ceremony in La Mesa, California.

In the Washington, D.C. area, she was a founding member of the American Samoa Society, along with participation in the Guam Society of America, the Hawaii State Society, the Women's Foreign Policy Group in Washington, the Independent Women's Forum, and the Pan Pacific and Southeast Asia Women’s Association.