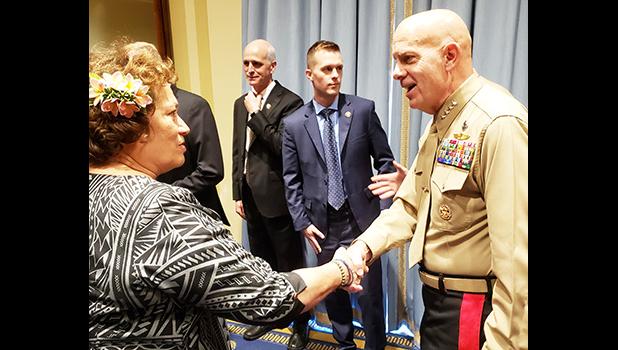 Washington, D.C. — Congresswoman Aumua Amata is welcoming House passage late Tuesday of a group of bipartisan and broadly supported veterans’ bills, including two that she co-sponsored.

“On the week of Veterans Day, the House is voting on a series of veterans bills,” said Aumua Amata, Vice Ranking Member of the Committee on Veterans’ Affairs. “Our nation has serious commitments to our veterans for the rest of their lifetimes. These bills each address some aspect that’s important to a portion of our veteran population.”

The House passed H.R. 3224, co-sponsored by Rep. Amata. This legislation, introduced by Rep. Julia Browley (D-CA), is also known as the Deborah Sampson Act, named after a woman who served in the Revolutionary War in the Continental Army.

Women have served in every U.S. conflict since. The bill provides increased access to Department of Veterans’ Affairs (VA) medical care to women veterans, and reduces inequity in acquiring these services. The Women Veterans Task Force has specified various problems that women encounter leading to wait times and other systemic failures in obtaining veterans’ benefits.

The House also passed another Amata co-sponsored bill, the bipartisan GI Bill Planning Act, H.R. 4162, introduced by Rep. Jack Bergman (R-MI). This bill extends educational assistance and broadens the timing for the availability of these benefits.