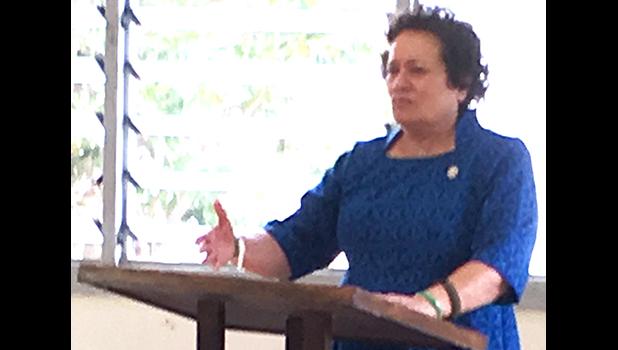 Legislation slowed minimum wage increase from 50¢ per year down to 40¢ every three years
Source: Office of the Congresswoman

“I continue to work hard to maintain a balanced policy that continues to recognize the fragile nature of the economy in American Samoa in order to protect current and future jobs here.

“Subsequent legislation postponed these increases due to the negative impact the wage increases were having on the American Samoa economy such as the devastating loss of our other cannery in 2009.

“Our current wage was established three years ago in 2015 with the enactment of Public Law 114-61, which came from a bill that I introduced and passed by working closely with key Members on both sides of the aisle in the House and Senate Labor Committee’s that oversee minimum wage legislation.

“This successful compromise with both House and Senate Democrats and Republicans was UNANIMOUSLY passed and became law.

“The effect of the new law is that when Congress passed my bill it protected jobs by slowing the minimum wage increase from 50 cents per year down to 40 cents every three years (that’s only 13.3 cents per year) — a roughly 70 percent reduction from the prior legislation’s schedule. This protects the worker’s wages against inflation and was necessary for unanimous support in Congress.

“This was a significant concession by those Members of Congress who represent competitors to our businesses and others that sought to raise the minimum wage to an unsustainable level for our local businesses as previously scheduled — our local businesses simply can’t afford to pay the same wages as they do in California and elsewhere in the States—and Congress recognized this special need in American Samoa.

“My goal is to protect the most jobs possible in American Samoa at the best possible wages. I’m happy that our people are seeing a pay raise, but also cognizant of the fragile nature of our job base being dependent on a profitable cannery in order to provide those jobs.

“The 2015 law that I sponsored also requires the General Accounting Office to do another study on the impact of this recent increase and report back to Congress by April 1, 2020 so that we can evaluate any negative impacts and make necessary changes, stoppages, reductions or other adjustments that may be needed.

“Throughout most of the United States, the federal minimum wage is much higher, at $7.25 per hour since mid-2009, but local wages in many States are mandated at $9, $10 and even higher than this and there is a significant debate in the Congress about raising that federal wage further, even doubling it.

“I will be monitoring this debate and educating my colleagues as to the negative impact this would have on American Samoa. One proposal in Congress is a steep increase to $15 an hour in the U.S. – this would cost many jobs even in the mainland but it would be devastating to jobs here in the islands. That’s why American Samoa must be an exception, instead of part of the one-size-fits-all national policy, and I will work in a bipartisan way to protect these jobs in American Samoa.

“Specifically, I will continue to work with the leaders of the House and Senate Labor Committees, the nonpartisan General Accounting Office and the House and Senate Leaderships to monitor the effect of this recent change in pay. I will also work with local workers and businesses so their views are included to GAO, Congressional Labor Committees and Leadership so that we properly adjust the minimum wage as needed before any additional increase happens in 2021.

“I will continue working for a fair wage policy that makes sense for both workers and businesses to keep and grow jobs in American Samoa for many years to come.”