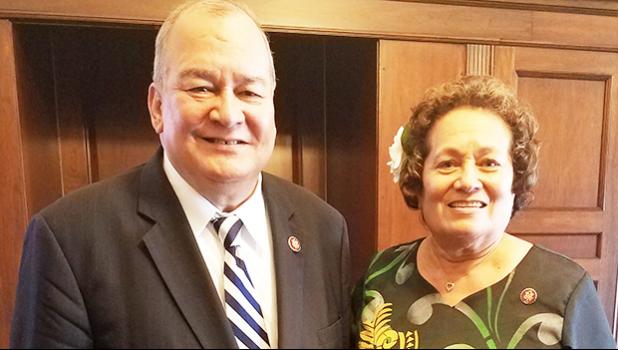 Washington, D.C. — Tuesday, Congresswoman Uifa’atali Amata announced she has teamed up with Congressman Gregorio Kilili Camacho Sablan (CNMI) for the reintroduction of their bipartisan Northern Mariana Islands and American Samoa College Access Act, which would provide much-needed tuition assistance to students in the islands.

The Northern Mariana Islands and American Samoa College Access Act would authorize new tuition assistance grants to aid in covering the gap between in-state and out-of-state tuition costs specifically for Northern Marianas and American Samoa community college graduates desiring to go on and attend a four-year public university, or seek to complete a four-year degree program.

“Our accredited community college does a great job, and we have many good students,” said Congresswoman Amata. “After that start or completing their initial goal at ASCC, our students deserve the same access to four-year University degrees that students in all 50 States have. Currently, our student do not share in those in-State tuition opportunities. I’m happy to once again work with Congressman Sablan on this legislation, and I appreciate his emphasis on education. This bill would help correct a financial disadvantage, and that would give our students improved opportunities to pursue higher education and career goals.”

This bill, introduced together with Congressman Sablan as sponsor and Congresswoman Amata as the original cosponsor, puts a strong emphasis on the importance of education for the future and growth of both Territories, their local economies, and the possibilities for the students and their ability to be competitive in modern, interconnected job markets.

“In-State tuition helps students throughout the country have a better chance to pursue a four-year college education that otherwise might be unaffordable to them,” she said. “We want to extend that concept to encompass an equivalent possibility for our own students from American Samoa and the Northern Marianas.”

American Samoa is geographically and economically isolated, causing needs for more and better jobs and educational opportunities, while household incomes in the Northern Marianas are less than half the national median. According to the College Board, nonresident students could end up spending over $14,000 more on average to cover their out-of-state tuition and fees. Additionally, students in American Samoa and the Marianas must factor in substantial expenses of flights to states, even to the closest state, Hawaii.

The bill is based on the working precedent of the DC College Access Act (Public Law 106-98), which allows DC college students to apply for grants that help with the cost of attending studies outside DC.