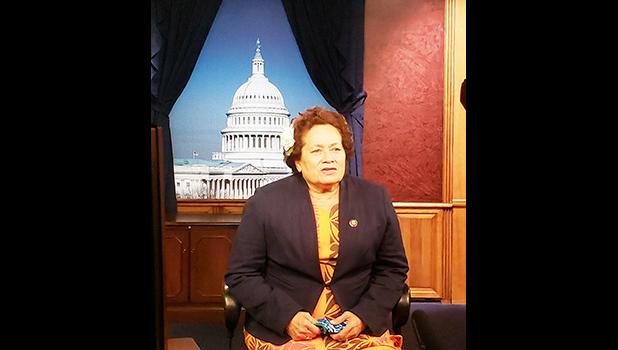 Washington, D.C. — Congresswoman Uifaatali Amata is encouraged by a bipartisan congressional update provided Thursday by doctors and scientists involved in coordinating development efforts. She will continue to urge federal authorities to take into account the territories’ unique status in their distribution plans, and ensure they are fully included.

The briefing for Members of Congress was led by Chairman of the House Energy and Commerce Committee Frank Pallone, to provide insights from Dr. Moncef Slaoui, chief science adviser for Operation Warp Speed; and Army General Gustave F. Perna, who serves as the chief operating officer of Operation Warp Speed.

Authorities describe the breakthrough announcements by two companies in the month of November as good news, with distribution to include cooperative efforts and plans by the states.

Congresswoman Amata and other Pacific Representatives signed a letter this month urging the federal government to understand the specific delivery and distribution challenges for the Pacific islands, and ensure the vaccine reaches their shores ready for use in an equitable way with distribution in the states.

“I’m encouraged by this optimistic and factual briefing,” said Amata. “Getting vaccines fully developed and delivered is not a political issue, and this was a bipartisan briefing. Once a vaccine is proven, approved and available, it will make a major difference to our islands’ health care abilities to contend with the virus, along with rapid improvements to our economic activities, travel, and certainly repatriation.”

The first two announced vaccine methods by well known medical companies have different storage and delivery processes. They have announced significant progress, but are not yet in use as they work toward federal approval.