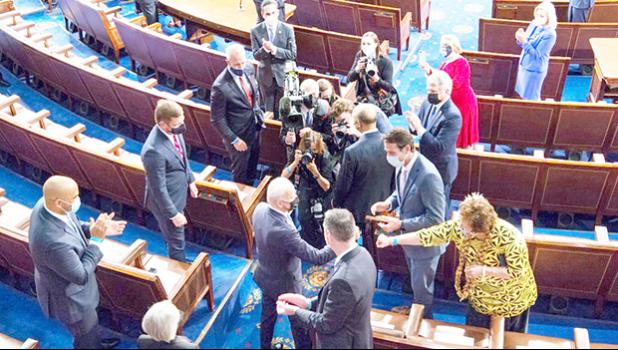 In a meeting with White House Associate Director for Puerto Rico and other Territories Gretchen Sierra-Zorita and Special Assistant to the President and House Legislative Affairs Liaison Alicia Molt-West, Congresswoman Amata discussed numerous topics affecting American Samoa, starting with LBJ Tropical Medical Center. Other points she raised were economic status and challenges, fishing, repatriation, and Amata’s bipartisan bill to streamline the citizenship choice for individuals (H.R. 1941), which has the support of all the Representatives from the five island territories.

“I think this was a productive time for American Samoa, and I really appreciate their questions and their interest,” said Congresswoman Amata. “It was a good opportunity to communicate directly to the White House in much the same way we reach out to key Senators and Committee chairs in the House.”

Congresswoman Amata apprised them of the report by the Army Corps of Engineers on LBJ’s need for major renovation or replacement, the general funding requirement which could be hundreds of millions, and the urgency of the request to get started on design.

They were also able to discuss the local economic reliance on fishing, the effects of Marine Monument policies, and the importance of the American Samoa Economic Development Credit, known in Washington as 30A, to the ability to recruit and retain jobs in the islands.

“I highlighted the status of our repatriation flights, because it’s important that the White House understands the disruptive effects of Covid in our islands,” Amata continued. “We’ve been blessed to prevent the virus, but it really transformed the year for many of our people, and caused all sorts of pressures for so many.”