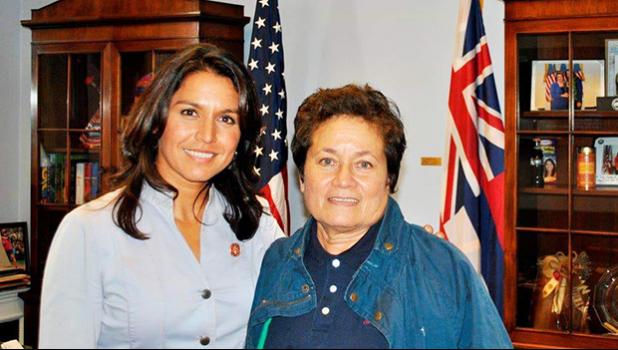 The legislation would better address the health needs of veterans from the Freely Associated States (FAS) – Palau, the Marshall Islands, and the Federated States of Micronesia – all part of the COFA agreement with the U.S.

“All of our veterans the world over need our strong support and commitment,” said Congresswoman Aumua Amata. “Thank you to Congresswoman Gabbard for this legislation that will mean so much to some deserving veterans in our Pacific region, and help develop better long term policies for veterans’ care.”

“Veterans have answered the call and put their lives on the line in service to our nation. Our nation owes a debt of gratitude and must ensure they get the care they earned and deserve, no matter where they live,” said Rep. Tulsi Gabbard. “The COFA Veterans Review Act is a first step toward ensuring our country fulfills its commitment to care for all our veterans.”

“If someone is willing to put their life on the line to defend the United States and our values in uniform, they should have access to the health care benefits they have earned,” said Rep. Don Young. “Too many U.S. military veterans in the Pacific – including those in the Republic of Palau, the Republic of the Marshall Islands, and the Federated States of Micronesia – do not have access to VA health care facilities or are forced to pay significant sums out of pocket and travel long distances to access care. We have made a promise to our veterans, and no matter where they are, it is critical that we continue to support them. This legislation takes needed steps to extend health care access to these veterans, and I am proud to support it. I am grateful to Congresswoman Gabbard for her leadership on behalf of our veterans, and in Congress, will continue prioritizing support for our heroes.”

“A promise made to our service members should be a promise kept. That applies equally to all those who answered the call to duty from the island states of the Compacts of Free Association,” said Rep. Ed Case. “If they need to access the medical care promised, then we need to assure they are not prevented from doing so by the time and cost of travel to the care they need.”

“On behalf of the Federated States of Micronesia (FSM), we are pleased to see the introduction of the COFA Veterans Review Act, which would establish a three-year VA pilot program to expand healthcare access to veterans living in the pacific region, including FSM. We commend Rep. Gabbard for her leadership on this important piece of legislation that would provide assistance to veterans in the Freely Associated States who must currently travel long distances to utilize their VA healthcare benefits,”said Federated States of Micronesia president David Panuelo.

“If adopted, this legislation would reduce current barriers to care for thousands of veterans, who have honorably served in the U.S. military.”

Specifically, the COFA Veterans Act would direct the Secretary of Veteran Affairs to carry out a three-year pilot program to provide hospital care and medical services to veterans living in the FAS as well as contribute data to a broader feasibility and advisability study on whether a permanent VA facility should be established in these countries and require the VA secretary to update census information on the number of veterans residing in the FAS, among other things.