Amata outlines priorities for Am Samoa's COVID and economic relief 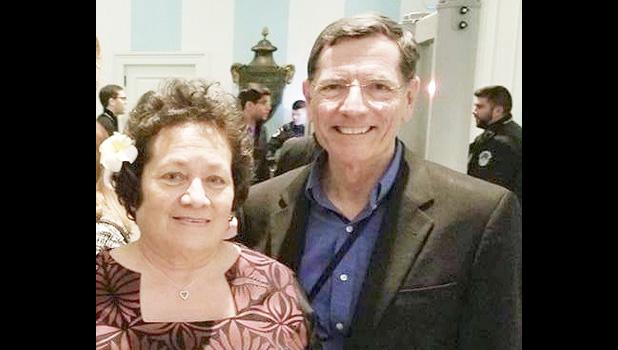 Washington, D.C. — Friday, Congresswoman Uifaatali Amata sent a letter to Senate Natural Resources Committee Chairman Joe Manchin (D-WV) and Ranking Senator Dr. John Barrasso (R-Wyoming), identifying needs and priorities for American Samoa in the major coronavirus and economic relief legislation, which is under consideration, and asking for maximum flexibility in Governor Lemanu’s ability to use and apply federal funds for the benefit of American Samoa.

The Congresswoman’s letter highlights the following:

·               Fully details the need for LBJ renovation and Medicaid funding, especially flexibility in applying those funds.

·               Another round of direct stimulus payments and unemployment compensation, with request to include workers lawfully in American Samoa that are currently excluded.

The full text of the letter is as follows:

Congratulations on your new positions as Chairman and Ranking Member of the Senate Committee on Energy and Natural Resources (ENR)which has primary authorization jurisdiction over policies affecting the US territories including American Samoa. It was a pleasure to have the opportunity to discuss with the key issues and challenges facing American Samoa when I testified before the Senate ENR Committee last June.

As a follow up to committee staff inquiry on issues in the next stimulus bill currently being drafted in the House, I am providing the following update for the Committee’s consideration. Eleven different committees in the House are currently reviewing and advancing a variety of proposals that will greatly affect the Country and American Samoa in particular. The Senate will likely be modifying the House bill final language in the coming weeks, likely to result in some modification of funding amounts and changes to minimum wage and other policies.

Accordingly, I hope the Committee ensures that our newly elected governor in American Samoa, Gov. Lemanu Mauga, has the utmost flexibility in determining the appropriate use of any Coronavirus State and Territory Fiscal Recovery Funds for the American Samoan Government, in particular the needs for our only hospital, the LBJ Tropical Medical Center, which is badly in need of modernization.

Indeed, after extensive examination on a bi-partisan basis and visits from various Members of Congress, including a CODEL led by your House counterpart, then Chairman Rob Bishop, the Senate ENR committee, at my request, directed the Department of Interior in its annual Appropriations package last Congress to conduct a feasibility study with the Army Corps of Engineer to determine our hospital renovation needs and options to improve our only healthcare facility. The Army Corps options ranged from modernization and repair of the current facility at its existing location from a $100 million all the way to total replacement at a cost of three-quarters of a billion dollars.

Current House stimulus proposals in the House include upwards of $350 billion for local, State and Territorial governments in Fiscal Recovery Funds mentioned, of which upwards of $510 million for the American Samoan Government, for which I fought hard for our fair inclusion.  Last year, the initial stimulus plan for these governments provided funds but severely limited their use. I understand the Senate may cutback these House amounts for State and territory Governments but hope you will protect the territories fair allotment and make sure our Governor can utilize these funds for his priorities, particularly improvements to our LBJ hospital. The Committee’s support in directing a portion of the $510 million for allowing the local government to improve the LBJ hospital would be significant.

On a related note, similar flexibility spending could also be utilized for financing our Medicaid services matching portion on some basis. Fronting the Medicaid matching costs and awaiting reimbursement puts tremendous strain on the Governor’s budget and cash flow operations and without improvements to our hospital we cannot fully take advantage of our allotted Medicaid funds. That funding is also currently capped for the territories and ask that the Committee Members support my bill which I introduced with the other territory Members of House to eliminate the caps and give us state like treatment, the Insular Area Medicaid Parity Act.

I am happy to work with the Senate ENR Committee on potential options on these issues in this regard on renovating our LBJ hospital. Continued support and funding for our local vaccine distribution and allotments is paramount as well.

A move to a $15 per hour minimum is too high and sudden a move for American Samoa.  This would be catastrophic for American Samoa and could bankrupt our government, which is our largest employer, with nearly 5000 workers.  It would also cause our largest private employer, StarKist Tuna Co., with nearly 3000 direct and indirect jobs, to close. These two entities are over 50% of our total workforce.  I ask that the Committee keep our current exemption in place which keeps us on a steady and more manageable path towards a wage increase. This exemption was supported by the House majority last Congress when it passed similar legislation. We are still a developing economy 7000 miles from DC and dependent on workers from the neighboring islands of independent Samoa for our cannery and small businesses.

The House has $130 billion for K-12 schools, which would include more than $100 million for AS K-12 improvements to our schools to protect teachers and students alike. There is also $40 billion for higher ed programs, that would provide the American Samoa Community College (ASCC) more than $25 million for similar improvements. I ask that your Committee help keep our U.S. DOE funded K-12 program and only higher ed program, the ASCC, fairly included.

I also ask that our Governor and local legislature the option to consider utilizing the refundable child tax credit (CTC) and earned income tax credit (EITC) provided they are 100 percent covered, including  appropriate administrative costs so that our local government would not be burdened with the costs of implementing these programs. These refunds would go to the neediest of our residents but could only be taken advantage of if the costs to our local government were affordable. As a non-mirror tax code territory our FONO, the local legislature, would have to approve with the Governor any changes to take advantage of these programs.

American Samoa faces unique challenges being south of the equator in a harsh tropical environment that severely erodes our infrastructure with over 300 inches of annual rainfall and limited adequate building grounds.  Accordingly, the Governor and FONO need as much discretion as possible to make the best decisions for our people once these funds are appropriated.

Our existing residents who previously qualified for the direct stimulus payments of $600 will also be eligible for an additional $1400 direct payment if and when these final stimulus amounts are passed. Our unemployment compensation funds also need to be extended past the current March 14 deadline, and I ask that you try to include our many legal residents and workers who are in the territory lawfully and also pay into U.S. social security be included for that unemployment compensation as well but who have been excluded as they are not citizens. Congress granted American Samoa control of its immigration to bring in needed workers who are there lawfully and pay into social security and are vital to our workforce and should be included in these benefits.

Thank you both for your leadership as Chairman and Ranking Member on the diverse and intricate issues facing each of the territories in this challenging pandemic. I look forward to working with both of you and other Committee Members on these matters vital to American Samoa. And please remember the great sacrifice American Samoans have made in our Armed Services where we regularly attain some of the highest enlistment and casualty rates in the Army.