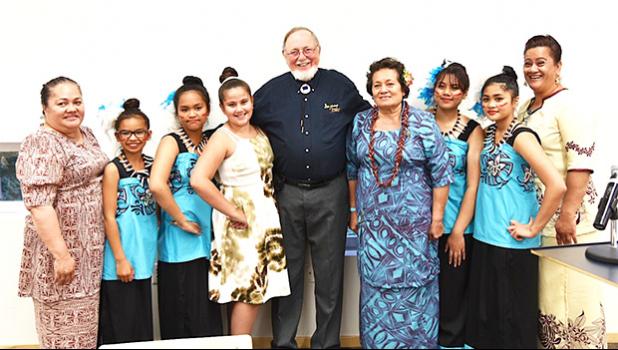 Washington, DC – Wednesday, May 29, 2019 - Congresswoman Aumua Amata was one of seven members to sign a bipartisan letter to the Department of Homeland Security regarding its administrative rules which place undue constraints on Compact of Freely Associated States migrants seeking to obtain REAL IDs.

“I was happy to cosponsor the REAL ID Act Modification for Freely Associated States, and I want to see this matter resolved completely for these legal residents of the U.S. in accordance with the legislative intent of Congress,” said Congresswoman Aumua Amata. “Thank you to Congresswoman Gabbard and Dean of the House Young for their ongoing leadership on this effort.”

“I was so pleased to see this important change to the law last year for U.S. residents from the Freely Associated States, among our nation’s closest friends and allies,” continued Congresswoman Amata. “I lived in the RMI for eight years, where I visited again recently, and all three nations play a key role in U.S. national defense and strategy.”

“The agreements the United States made through the Compact of Free Association are being undermined by current Department of Homeland Security rules, making it very hard for Compact migrants to get the identification they need to get a job, go to school, or travel. DHS rules contradict existing law, and must immediately be corrected,” said Congresswoman Gabbard. “This is an urgent situation impacting thousands of people who have legally come to the United States and are suffering the consequences of this bureaucratic mishap.”

“My bill, H.R. 3398 — which was previously signed into law — was designed to correct an egregious oversight which prevented citizens of the Freely Associated States (FAS) from obtaining anything more than a temporary ID or driver’s license. As a practical matter, this can hurt their ability to maintain long-term employment or engage in other lawful activities where they legally reside,” said Congressman Young. “When my legislation became law, it should have solved this issue and allowed FAS citizens to obtain REAL ID compliant identification.

“However, recent guidance put into place by the Department of Homeland Security has imposed additional burdens on these citizens,” Rep. Young continued. “FAS citizens who reside here are proud to call the United States and its territories home, and it is my hope that DHS will work with us to find a long-term solution for them in line with the intent of Congress."

“Our Compacts of Free Association with the Federated States of Micronesia, and the Republics of Palau and the Marshall Islands are of key importance to all of our countries,” said Congressman Ed Case (D-Hawaii). “The Compacts permit citizens of the Freely Associated States to live and work in our country with a valid unexpired passport and documentation that they entered under the Compacts. It is directly contrary to the Compacts to impose onerous additional requirements that make it very difficult for them to access the basics of everyday life like driving and working.”

The 2005 REAL ID Act erroneously cited a defunct agreement that preceded the Compact of Free Association which allows the citizens of three nations, the Marshall Islands, Palau, and the Federated States of Micronesia to live and work in American states and territories without visas or employment documents, including thousands in Hawaii.

Last year’s bipartisan legislation provided the necessary fix to the REAL ID Act to ensure that COFA migrants would be eligible for the now required identification. The legislation was signed into law by President Trump.

However, April 2019 DHS guidance currently still requires COFA migrants to produce documents not required by their migration status in order to obtain their REAL IDs. REAL IDs are necessary for a range of things which have significant impact on the day-to-day lives of individuals including employment, travel, participation in federal programs, and entry to federal buildings.