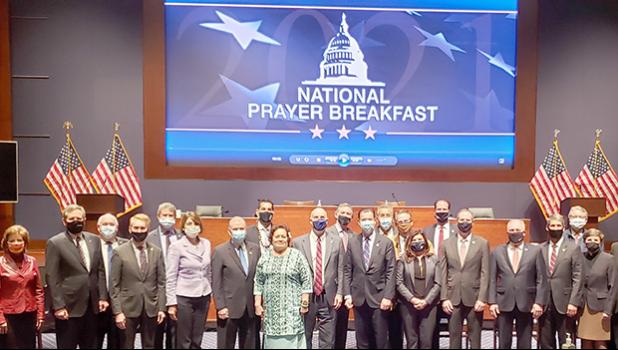 Washington, D.C. – Thursday, Congresswoman Uifaatali Amata took part in the National Prayer Breakfast, her fifth time to participate. The annual bipartisan event has been held since 1953, when President Eisenhower became the first President to attend and bring widespread attention to the event, which has grown to often attract 3,000 people in recent years.

“I appreciate the National Prayer Breakfast so much, and all the Members of Congress who participated, and a special thank you to President Biden for continuing this important tradition, and the Congressmen and Senators who hosted, “Congresswoman Amata said in the media release.

“It was a pleasure to take part, and share in these prayers for the well-being of our nation, and be thankful for all we have in the United States. We can pray for our national unity, our many members of the Armed Forces serving in so many places, our Veterans, our families, and those struggling with COVID-19 health issues, absences from family, job losses or small business struggles.

“I appreciated the thoughts expressed at the National Prayer Breakfast, as we were led to pray for God’s guiding hand on our President and those in leadership in both parties. In American Samoa, we should also pray for Governor Lemanu and Lt. Governor Talauega and their administration, the Fono, and the people of American Samoa. The Prayer Breakfast has a long and special tradition, and I think this year was another meaningful chapter to come together and desire the best for the nation and its leadership.”