Amata testifies on need for additional support for Medicaid and LBJ 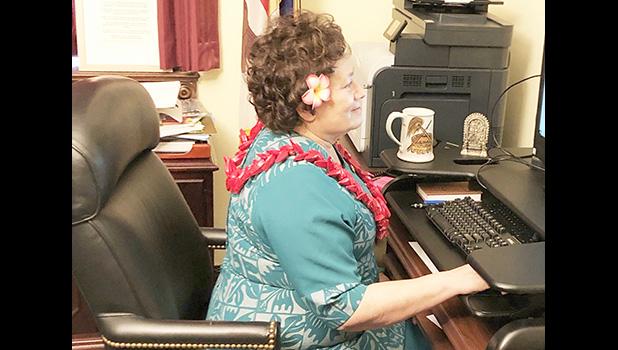 Washington, D.C. — Congresswoman Uifa’atali Amata testified before the House Energy and Commerce Committee on the need for additional support for American Samoa’s Medicaid program and modernization of LBJ Tropical Medical Center. Amata is an original cosponsor of the Insular Areas Medicaid Parity Act, over which the Committee has jurisdiction. The bipartisan bill would provide stable permanent funding, lift the caps, and maintain an increased FMAP for the territories.

Following Congresswoman Amata’s emotional statement, Chairwoman Anna Eshoo (D-CA) responded, “The Chair thanks her for her passionate testimony. We all could hear in your voice what the incredible needs are.”

Amata briefed the Committee, beginning with American Samoa’s status, “We are the most remote U.S. jurisdiction in the Medicaid program at 7000 miles away — south of the equator — and have not had any commercial air service to our territory in almost one year. Not since March 23, 2020, that was the last commercial flight from Honolulu to American Samoa. Hundreds are still stranded and going through a month-long quarantine process — two weeks in Hawaii and two weeks in American Samoa — just to get home after being restricted elsewhere in the Country,” she testified, noting that, “Our health services and only hospital simply cannot handle a sudden influx of thousands of new arrivals at this time.”

Congresswoman Amata emphasized the long term priority of LBJ Tropical Medical Center. “We appreciate the temporary increase in our FMAP, which has been helpful, but we need improvement to our only hospital, which is 50 years old, in order to expand and improve services and attract broader physician services,” she said.

“Our residents and veterans face challenging logistics and most often need to travel to Hawaii for more serious care — and the pandemic has shown us that has become a limited option to our sick during this crisis, so improvements to our local hospital are needed,” she continued. “In normal circumstances our people have only two flights per week to get to Hawaii; that limitation alone would be recognized as an emergency in most jurisdictions.”

She asked the Committee to maintain American Samoa’s current emergency matching level and eliminate the annual ceiling on federal financial participation (referred to as the Section 1108 cap or Section 1108 allotment).

Congress, as part of COVID relief legislation, has provided an additional 6.2 percent federal cost share, so American Samoa is at an 89.2 percent FMAP.

“This has been welcome as we are indeed very much in a continued emergency state — and I would argue our program and hospital capabilities have been in an emergency state long before the pandemic,” Amata said.

Congress has raised American Samoa’s Section 1108 Medicaid allotment for Fiscal Years 2020 and 2021 substantially from about $12.5 to $86 million. At the same time, Congress increased the FMAP from 55-45 to 83-17 percent then temporarily even higher at the current rate of almost 90-10, to help stretch local matching funds. Amata urged an improved hospital infrastructure, so the Territory could utilize even more to potentially reach that cap in the next few years. She requested “stable multi-year program funding” with caps raised.

“We do not have sizable tourism or diversified businesses and economies like the other territories.

The local government and the tuna cannery account for nearly half of local jobs, and our small businesses have taken a huge hit with the island closed off,” she concluded. “Our young people continue to serve in record numbers in the armed services with record per capita enlistments in the Army. And our veterans give so much back to our community, we need to carry them through with an improved hospital/VA facility.”