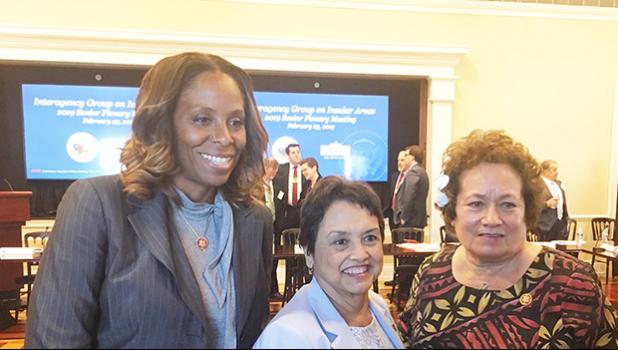 IRS plans for a web portal shortly for this program in the territories
Sources: Media release from Cong. Aumua Amata's office

Washington, D.C. – Congresswoman Aumua Amata shared on Thursday an update on the status of stimulus checks following a conference call briefing with senior Internal Revenue Service (IRS) officials, and highlighted IRS plans for a web portal shortly for this program in the territories.

On Wednesday, Congresswoman Aumua Amata, along with the House of Representatives Vice Chairman for Territorial Affairs, Congressman Kilili Sablan of the CNMI; Congresswoman Stacey Plaskett of the USVI; and Congressman Michael San Nicolas of Guam spoke with senior IRS officials in a closed briefing to the territory Representatives on the implementation of the stimulus checks of $1,200 for individual tax filers and $500 for children. The briefing was provided by Dee Rutkowski, Program Director, IRS, U.S. Territories. Also in attendance was James Glenn, IRS Legislative Affairs.

Director Rutkowski indicated all the territories have filed their required Economic Impact Payment (EIP) plans to the IRS, which are currently being adjusted and finalized, and expected to be approved in the coming days. IRS officials said the goal is to mirror the stateside programs as much as practicable while recognizing unique challenges for each territory.

Substantial front end funds are initially advanced to each territory’s government to disburse the stimulus payments. Each territory will be able to submit additional requests for payment funds as qualifying applicants are processed and approved, and 100 percent of all of the ASG administration costs will be covered.

Importantly, the Treasury Department at www.IRS.gov will create a separate web portal to be used by American Samoa and the other territories to provide updated information. That is expected to be up and running next week to help facilitate disbursement, so beginning in about a week, check for that at the IRS website.

“I believe establishing a distinct portal for the U.S. Territories, as my colleagues and I advocated, could facilitate the disbursement of these funds,” said Aumua Amata. “Expediency is especially meaningful to those who have been displaced or lost jobs or income because of the COVID-19 pandemic.”

“The IRS indicated they are modeling their program after prior 2008-09 financial crises and ARRA payment programs,” continued Amata. “This is good news because they have several veteran staff members who worked on the unique aspects of implementing territory stimulus programs during the 2008-09 effort once again working on our Covid crisis implementation. It’s good to know seasoned professionals at IRS and Treasury are helping guide this work, and I want to thank them all, the Governor, his Task Force Members and tax revenue departments who are relied on to provide Treasury with all of the key information.”