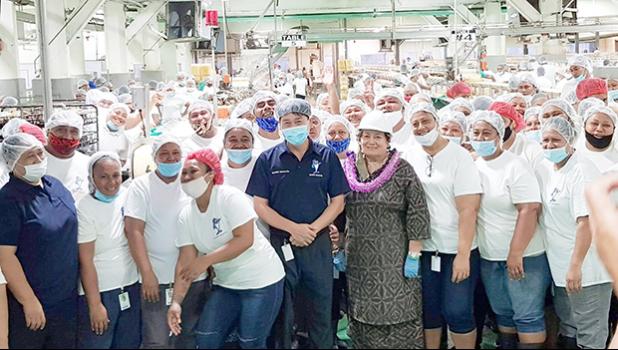 Amata’s letter to Food and Nutrition Service Administrator Cindy Long, dated December 17th, was copied to the White House Made in America Office Director, and the Department of Interior’s Office of Insular Affairs.

“Last fall, then-candidate Joe Biden’s campaign stated: ‘Biden starts with a pretty basic idea – when we spend taxpayer money, we should buy American products and support American jobs.’ I cannot agree more,” states Congresswoman Amata in the letter. “That is why, when it comes to food purchases for the School Lunch Program, USDA guidance related to Buy American requirements should be strengthened by eliminating the vague, and inconsistently applied ‘significantly higher’ cost exception – an exception that has been used as an excuse to spend American tax dollars to buy foreign-produced, subsidized tuna.”

President Biden has signed the Executive Order on Ensuring the Future is Made in All of America by All of America's Workers. That Order called for a review of all agency waiver procedures of Buy American requirements, which in turn led to a Request for Information by the Food and Nutrition Service of USDA on Buy American in the National School Lunch Program.

“I appreciate this review being undertaken and urge that it result in closing the loophole by which foreign sourced tuna is procured in significant amounts through the National School Lunch Program,” Amata continued. “This issue is particularly important to American Samoa.  Our island’s economy depends upon the tuna industry.  Eight of every ten private sector employees on the island have jobs related to the industry and its associated businesses. The vast majority of those who rely upon these jobs are Pacific Islanders.  88% of American Samoa’s exports to the United States are canned tuna.”

“American Samoan tuna products are the only packaged tuna products that meet Buy American requirements.  And, they are of higher quality than foreign product.  Fish sourced in American Samoa is frozen once, as opposed to non-US sourced fish which is frozen twice,” she noted. “Unfortunately, our industry is under siege from subsidized foreign competitors who can pay their workers significantly lower wages and who do not face the same safety, environmental and regulatory requirements as does our industry.”

“Foreign sourced tuna products rely on, and benefit from, a model that outsources the workforce intensive processes to extremely low-wage, largely unregulated countries. Manufacturers of these products then take advantage of nearly duty-free importation of cleaned, cooked and frozen tuna ‘loin’ into the mainland United States.  The loins are then simply thawed and placed into final packaging using the least amount of U.S. labor possible,” continued Rep. Amata. “For example, hourly rates paid by StarKist, our island’s sole processor approximate $6 hour. Compare this with Thailand, where wages are estimated to be $1.24/hr. Other countries from which the U.S. imports processed tuna (Vietnam, Fiji, Mauritius and Indonesia) have similarly low wages.”

“Manufacturers of foreign sourced tuna products also benefit from government subsidies in the form of capital investment into facilities, fuel and energy subsidies.  Globally, governments allocate an estimated $35.4 billion annually in fishing subsidies, with China providing more in subsidies than any other nation. Fuel subsidies (including fuel specific tax exemptions) is the largest subsidy type at 22% of the total global subsidy.  Asia, including China, is by far the greatest subsidizing region (55% of the total),” the letter continued.

President Biden’s Executive Order calls for the head of each agency “to consider suspending, revising, or rescinding those agency actions that are inconsistent with” the Buy American policy set forth in the Order.  It also requires each agency head to “consider proposing any additional agency actions necessary to enforce” this policy.

“Consistent with this Order, USDA guidance related to Buy American should be strengthened by eliminating the ‘significantly higher’ cost exception – an exception which is vague, has been inconsistently applied, and has been utilized as an excuse to expend tax dollars to buy foreign-produced, subsidized tuna,” Amata concluded. “It has long been a fundamental goal of US agricultural policy to give American producers tools to compete with foreign subsidized competition.  Using tax dollars to purchase foreign produced tuna for the School Lunch Program does the opposite by rewarding those countries that subsidize their fisheries to the detriment of American Samoa, and it should be stopped.”