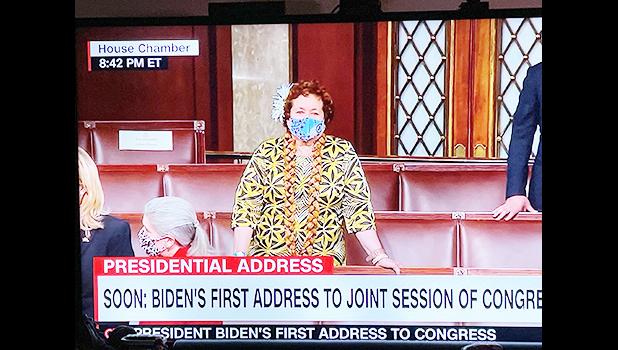 Washington, D.C. — Last night, Wed, April 28, Congresswoman Uifa’atali Amata attended President Biden’s first speech to Congress at the U.S. Capitol, marking 100 days of the administration this week, though attendance was limited due to COVID-19 precautions. She released the following statement:

“I was humbled to be selected to attend in person, as out of 441 total Members of the House only 200 could go. President Biden announced his legislative push for the infrastructure package, and new benefits for families with children. I support a strong infrastructure focus, and my priority is the needs of LBJ Tropical Medical Center, plus attention to necessary roads, seawalls and other local efforts and projects.

“The President is proposing two years of paid community college, which would be important to our young people and American Samoa Community College. He’s proposing free pre-school for ages 3 and 4, along with other child care and nutrition measures. Just this week, I signed a joint letter from Members of Congress working together for a major investment in K-12 education.

“This legislation, called for by President Biden, will be written with input from the House and Senate. Working with the other Territories, my priority is always that American Samoa is fully included and treated fairly along with the States. Later this week, I am meeting with the White House liaison to Congress, to discuss how our goals for American Samoa can line up with the President’s policy initiatives.

“During this pandemic we are seeing record federal spending, but the U.S. economy has proven to be strong and resilient. The vaccine success is another factor helping people get back to work and the economy moving. I appreciate the thoughtful responding speech by Senator Tim Scott, who is a respected leader in the U.S. Senate. Congress should be mindful of how U.S. businesses can be kept on a competitive footing with international corporations as new taxes are discussed. I will keep you informed on important legislative developments, and what it will mean to American Samoa.”