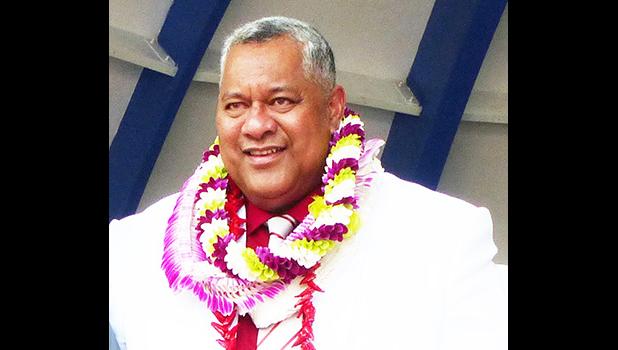 Pago Pago, AMERICAN SAMOA — With the current audit by the US Treasury Department’s Office of Inspector General over the use of federal COVID-19 funds allocated to American Samoa, Gov. Lemanu Peleti Palepoi Sialega Mauga says the government has launched an “approach to increase being accountable in every area of our work performances.”

Lemanu made the revelation in his official written English version of his State of the Territory Address distributed to the Fono leaders and lawmakers as well as copies to the Judicial Branch, cabinet members and others.

The governor delivered his inaugural address in Samoan on Monday to a joint Fono session at the Gov. H. Rex Lee Auditorium, while a booklet of his official English written address was distributed as well to lawmakers. Later in the day, his office sent out a final version of the English address.

In the cover letter to the Fono leaders, the governor said his address is a summary of findings and it’s the initial part of the groundwork for the next four years between the Legislative and Executive branches.

He said the government has “deviated from the normal layout of identifying strengths and weaknesses, for we aim not to focus on any shortfalls of our predecessors but our joint efforts in moving forward.”

According to the governor, the priority goal for the two branches of government is passage of an achievable fiscal year 2021 budget as “we cannot continue to operate on executive orders and resolutions.”

In moving forward, the governor said a “dynamic group of knowledgeable leaders” have been appointed to serve as directors of departments and agencies. And each individual possesses a unique set of skills, strong work ethics and a commitment to public service.”

“Confirming their appointments is critical to executing our administration’s plan,” he said and noted that the Executive will work with the Fono to pass the FY 2021 budget and also work on confirmation hearings to allow cabinet directors to begin their work.

The governor then confirmed that the US Treasury’s OIG is conducting a full audit of coronavirus relief fund allocated to the territory, and the government “will continue these communications as necessary pending the outcome of the audit.”

Lemanu said he has reached out to the US Interior Department’s Office of Insular Affairs to help with an external audit to conduct a review of the deployment of coronavirus relief funds and the projects.

“Our first year in office presents promises along with challenges,” he said. “We will build on the positive trends and outcomes from our predecessors, while finding solutions and the best way forward.”

“As any progressive administration, opportunity is always available for growth and development,” he pointed out but didn’t elaborate on the federal audit.

Samoa News notes that the US Treasury’s OIG semi annual report to Congress last month — covering the period of Apr. 1 to Sept. 30, 2020 — gave a summary of its audit projects, includes those for American Samoa.

That audit raised concerns over uses of funds to make payments to members of the Fono and OIG determined that the funds be returned to ASG for future uses of related COVID-19 expenes. “We did not make any formal recommendations in our letter,” it says.

In his Samoan address, the governor noted that the ASG is operating under FY 2020 budget levels, and that ASG had a surplus of $11.3 million at the end of FY 2020.

While this is good news about this surplus money, for which he is thankful to the previous administration, Lemanu said this amount won’t cover the first two quarters of FY 2021. (It should be noted that First quarter of FY 2021 ended on Dec. 31, 2020.)

In his written English address, the governor said the preliminary statement of revenue expenditures and change in fund balance reflects a collection of revenue total at more than $31.47 million — as of Dec. 31, 2020 (which is the end of the first quarter of FY 2021).

The governor spoke about the repatriation of American Samoa residents stranded in the US and revealed that the first planned flight is scheduled for Jan. 29th. He said the new COVID-19 Task Force chaired by Lt. Gov. Talauega Eleasalo Va’alele Ale will provide clear and concise information on the repatriation plans in the coming days. (See yesterday edition for more information.)

On Monday night, the task force released a statement about the governor announcing the planned first repatriation flight set for Jan. 29th and that American Samoa residents and returning Medicaid referral patients wanting to return home must register with the ASG Health Department website (americansamoapublichealth.com). The statement also outlined requirements such as 10-day quarantine in Honolulu. (See press release printed elsewhere in today’s edition for details.)

In the written address, the governor said the Vaccine Distribution Working Group under the new task force has been working diligently in implementing tiered vaccination schedules to ensure that frontline healthcare workers, first responders, high-risk population and ultimately the entire community is able to get vaccinated.

“We express our sincere appreciation for the vigilance and tireless efforts of our healthcare professionals, first responders, and all involved in the coordination of a complex repatriation operation,” he said.

“We intend to improve upon these plans based on the best available data from our experts while ensure our residents are able to return to their families both swiftly and safely,” said Lemanu, who noted that he and Talauega received their first dose of the COVID-19 vaccine — which was late week Friday — and “we encourage our government workforce and general public to do so when the opportunity arises.”

Samoa News points out that the Health Department started on Monday this week and through Friday, the next tier of those to get the vaccine and these are individuals 65-years and older.

He also spoke about the “Path Forward & Opportunities” on which Samoa News will report later this week.

“Our most immediate focus is the safety and health of our people — we are facing life and death with COVID-19. We have no way of easing the challenges without continuing the current focus on preventive measures,” Lemanu said.

Additionally, “we will continue to set every achievable measure to keep us free from the virus as we have been for the last ten months.” At the same time, “we will keep our promise to revisit the pressing requests for repatriation with critical care requirements,” he said.

Regarding the US Treasury’s OIG audit, Lemanu revealed that “we launched an approach to increase being accountable in every area of our work performances” and the government will work to “further build our image as possible people of integrity and wise stewardship of resources we are blessed with.”

“Following our endeavors at accountability is the inevitable challenge of saving operational costs in each section of the government,” he pointed out. “Making tough decisions is never easy, but as leaders we are charged with such a calling.”

In the first 100-days in office, Lemanu said, “we hope to release a clear vision across various issues and priorities. While our many issues cannot be solved in 100 days, we do intend to outline the direction and priorities of our administration over the next four years.”

Lemanu said he and Talauega look forward to a “warm working relation” with the Fono in the next four years.