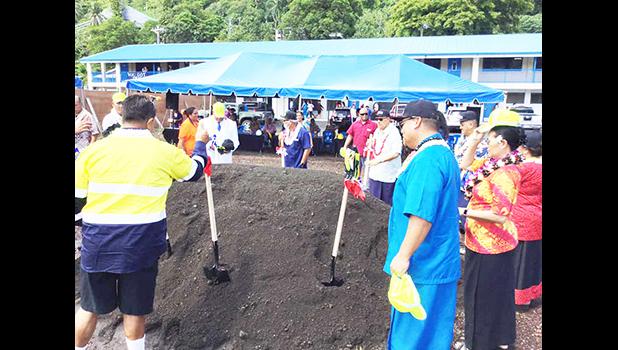 This according to the ASG schedule of groundbreaking ceremonies distributed at last Wednesday’s cabinet meeting. Yesterday was the groundbreaking of a new American Samoa Community College building while Dec. 1st is the planned date for the Manu’a Consolidated School groundbreaking.

Lolo told the cabinet meeting that planned upcoming events — which include dedication next month of ongoing ASG projects —  80% are for the Department of Education saying that it’s important to continue the improvement in the delivery of education for the children of American Samoa to benefit the territory’s future.

The first groundbreaking last Friday, was Fagaitua High School where Public Works director Faleosina Voigt explained that seven bidders submitted bids for the project, ranging from the lowest at $830,00 to the highest $1.1 million.

DPW engineer's cost analysis is $945,000 for the two-story building, said Voigt, noting that the first floor will have the music room, two classrooms and an office while the second floor will have four classrooms.

And the project is awarded to FTK Corporation at the cost of $850,500 and the company is given 240 days to complete the project, according to Public Works director.

Voigt also told the audience that FTK Corporation is one of the three contractors for government projects that’s headed by a woman — Mrs. Tui Fa’amausili.

She explained that FTK Corporation has recently completed government projects such as offices at the Procurement Office and improvement to the Juvenile Detention Center.

In his remarks, the governor acknowledged Voigt’s comments of contractors headed by women, saying that women are able to get projects moving forward faster.

The governor pointed out that the other project initiated last Friday was Samoana High School, to be followed by Pavaiai and Alataua Lua elementary schools. He explained that these projects — as well as four private school projects — are funded with American Samoa funding allocation under the federal CARES Act.

As previously reported by Samoa News, the US Secretary of Education announced in early May this year, awarding ASDOE more than $45.59 million under provisions of the federal Coronavirus Aid, Relief and Economic Security (CARES) Act.

At the groundbreaking ceremony, Lolo explained that all these new school building projects are funded with the $7.27 million under the GEER program.

The governor informed Voigt that Fagaitua needs at least 16 more classrooms and there is available land space on the campus to achieve this goal. He said that educating a child is everybody’s role and called for the community’s support.

He also said that a new administration will be taking over the helm of government soon and for the community to give them support, as well as praying for the territory’s leaders.

In her brief remarks, Education director Dr. Ruth Matagi-Tofiga said Mrs. Tui Fa’amausili is her classmate. “It’s wonderful to see women rise up in terms of construction” companies, she said and thanked the governor for the allocation of funds under the CARES Act to help with school facilities.

At the cabinet meeting last Wednesday, Dr. Matagi-Tofiga said that all of the information on ASDOE current and pending projects as well as specific issues funded under the CARES Act are available on ASDOE’s website (www.doe.as).

Voigt told those attending the Samoan High groundbreaking that 12 bids were received for this project, with the lowest one at $839,000 and the highest at $1.24 million, while the engineer's cost estimate is $932,000.

This is also a two-story building, with the first floor housing offices and bathrooms, while the second floor has 4 classrooms. Contractor for the project is Happy Construction, which has 240 days to complete the project at the cost of $839,000.

She explained that Happy construction has carried out various projects such as seawalls, school buildings, and currently the is contractor for the Fonoti/ Leapaga road through Fagaima to Malaeimi as well as contractor for the gym at Lupelele Elementary school.

The governor, and Dr. Matagi-Tofiga also delivered brief remarks at the event.