Another option for local degrees 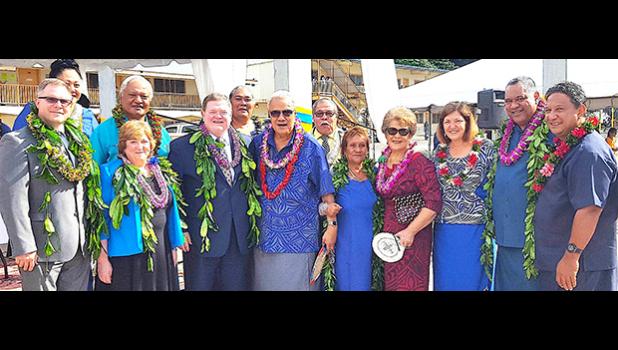 Pago Pago, AMERICAN SAMOA — American Samoa residents looking for options as far as college now have another choice available to them — locally. Wayland Baptist University, a non-profit college and the oldest institution of higher education in continuous existence on the High Plains of Texas, officially opened its doors to the local community yesterday, following a brief ceremony that was attended by cabinet members, lawmakers, past and current educators, and Lt. Governor Lemanu Peleti Sialega Palepoi Mauga.

Papali'i Laulii Alofa, credited with being one of the driving forces behind Wayland's smooth transition to the territory, explained that Manumalo Academy and Manumalo Baptist Church were receptive to having Wayland operate out of its Malaeimi location because not only does it provide a way for locals to get an affordable college education, it also shares its Christian-based mission, of bringing people to God.

He called on government leaders for help, as far as subsidizing the program, so the school can remain open and offer low cost degree programs for locals.

He said the process of getting Wayland to American Samoa was not easy. This, he said, is because they are non-profit, "meaning they don't pay much for staying with us (Manumalo)."

"And I say this … in hopes that the Lt. Governor, the Speaker, and also ASPA can help out. The only thing Wayland pays for is the electric bill. Maybe Paul Young can help out because in doing so, it can help bring down the cost of education in American Samoa."

Papalii continued, "We've seen the Governor and Lt. Governor pushing for people to get degrees but we've got to make it affordable." He said he believes once the school can get support from the government, "everyone will get a degree."

The Manumalo Church choir sang hymns for the 30-minute ceremony and Pastor Filifaatali Mike Fuiava, who is also the director of the ASG Agriculture Department delivered the invocation. Pastor Lemmy Seumanu offered the benediction.

In his remarks, Lt. Governor Lemanu said "American Samoa has been blessed," with Wayland's presence, adding that the move makes American Samoa part of Wayland's history.

"We are now Wayland's southern most campus location, the school's 15th campus worldwide," he said.

Dr. Seebo was given the honor of cutting the cake.

Dr. Jacobson spoke to the crowd about the "divine intervention" that led to the decision to open a Wayland campus on island.

He explained that back in 2016, he spoke to Pastor Tafao who expressed his longing about opening a college in the territory. Some time had passed and one day, the same pastor showed up at the school's Hawaii campus and the two men kept in contact. The rest, as they say, is history.

"Today is a very rewarding day," said Dr. Jacobson, adding that the partnerships made with Manumalo Academy, the ASCC, the local military unit, Paramount Builders, Happy Valley Baptist Church, and Samoa Baptist Academy has resulted in the school being able to offer its services to the people of American Samoa.

In his remarks, Dr. Hall provided a brief history of Wayland — how pioneer physician Dr. James Henry Wayland established the school in 1908 with $10,000 and 40 acres of land, with the belief that education should be accessible to all, and that is should be grounded in faith, in Christ.

Wayland is an accredited school by the Commission on Colleges of the Southern Association of Colleges and Schools to award degrees at the associate, baccalaureate, and master's level.

In an initial interview, Dr. Jacobson told Samoa News he refuses to bring instructors in from off island, saying he wants to employ locals, as they are familiar with the culture, the students, and the challenges. Also, he added, hiring locally will assist the local economy.

Wayland’s tuition per credit hour is one of the most affordable among accredited universities. The school also accepts tuition assistance vouchers from all military branches, including federal and state agencies, and civilian organizations.

Financial aid assistance is available to military and civilians, and there’s the convenience of evening and weekend classes.

Wayland has 8 locations on Oahu — seven on military bases, and one campus in Mililani.

Up to 12 credit hours can be awarded for work experience and ACE accredited military schools, police and sheriff academies can count towards more than 1/3 of credits needed.