Are THC watch officers being ‘locked in’ with inmates? DPS deputy commissioner says NO, but others say YES they are 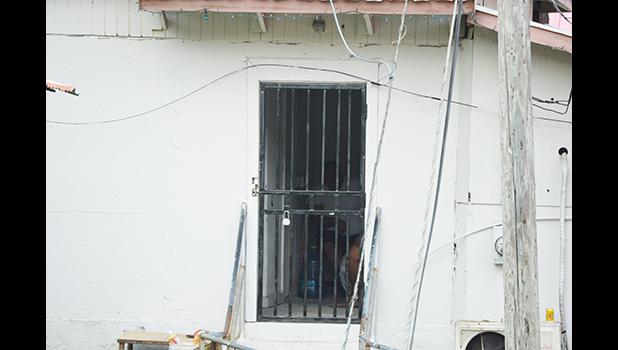 Pago Pago, AMERICAN SAMOA — There’s a lot of criticism from family members and some senior police officers regarding what they say is the decision made by DPS Deputy Commission, Falanaipupu Taase Sagapolutele to have the police officer assigned to watch the three inmates detained at the Temporary Holding Cell (THC) at the Central Police Station to be locked inside together with the inmates. However, Falanaipupu denies the allegation saying the officers can come out any time they want.

It has been two weeks since Samoa News received numerous phone calls from family members of the officers who are assigned to the THC, voicing their concerns and frustration over the decision to have their loved ones locked up together with their charges — the inmates — inside the THC.

A man who called Samoa News regarding this issue, expressed his disappointment about the decision, saying that his son was sworn in to protect the safety of the community, not to be locked inside a prison cell with criminals.

“Something is not right with this decision and the Police Commissioner needs to look at this matter,” the man said.

“If there is a problem of inmates leaving the THC, DPS should look at other options to solve the problem, but not allow officers to be locked inside with inmates.”

According to the caller, “It seems like DPS is adding more fuel to the fire,” adding, “We have a problem of inmates allegedly leaving the THC, but when something happens to the safety of the police officer while locked inside the THC, who is going to be blamed?”

Another caller, a woman, echoed the concern voiced by the first caller. She said that DPS must build a separate small office to attach to the THC, so that police officers can have a place for their own privacy.

According to the second caller, who described the situation, there are two cells inside the THC and each cell has its own lock. The inmates are supposed to stay inside the two cells while the watching officer stays inside the hallway of the THC during his 12-hour shift.

The second caller further stated that there are times when the three inmates were released from their cells and were seen hanging out with the officer on duty inside the hallway of the THC.

The three inmates who are housed at the THC include a 35-year-old man convicted of molesting a 5-year-old girl three years ago, and the other two inmates are accused of murder.

According to one family member, DPS should take as their top priority the safety of all police officers.

“This is not how the Department of Public Safety (DPS) should solve the problem of inmates allegedly leaving the THC. They need to revisit the decision and come up with a professional idea to solve the problem. Not to place the lives of police officers in danger.”

Another caller said, “We’re talking about inmates accused of serious crimes such as murder hanging around with a police officer every day. The officer is not an inmate, so he should not be locked inside the THC together with the inmates.”

It’s putting officers’ lives in danger…“these officers have families while some of them are more dear to their parents,” another senior officer told Samoa News.

Samoa News was able to sit down with Deputy Commissioner Falanaipupu at his office last week for a one-on-one interview. During that interview, Falana’ipupu denied the allegation regarding the decision he made a few weeks ago.

He said the decision was to let the police officer stay inside the hallway of the THC while the inmates are locked inside their cells.

According to the Deputy Commission, the main reason why he made the decision is to solve the ongoing problem with inmates leaving the THC unauthorized, along with other past issues arising from the THC confinement.

“We had some problems in the past that we need to address, such as police officers allowing inmates to leave the THC at night, and inmates leaving the THC while the officer on duty is walking around in the main office,” he said.

There was also a time when inmates had a fist fight after consuming alcohol inside the THC.

According to Falana’ipupu, the only way to solve these problems is to let an officer stay inside the THC with the inmates.

“I just want to make this issue clear that the officer is not locked inside the THC with the inmates,” Falana’ipupu concluded.

Samoa News paid a visit to the scene and was able to take a photo of the front side of the THC where you can see the steel door and a big lock hanging outside.

As Samoa News was taking the photo of the THC, a police officer in his uniform was seen inside the THC.

It was clear from the outside view that the police officer and inmates were having a friendly conversation in the THC hallway.

When Samoa News called out to the officer if he can come outside at anytime, the officer replied, “No, I can’t come out until the next officer on duty will come in to relieve me. The lock can only be opened from the outside.”

Two police officers were arrested and charged last year on the allegation that they allowed inmate Manu Lefatia to leave the THC without permission.

The two officers are Saito Pesaeli and Tuluiga Richard Salanoa.

Pesaeli told investigators that he was the one who allowed Lefatia to leave his cell and go home to visit his family and come back within an hour. He further stated that Lefatia asked him numerous times if he could go home to see his son who was sick.

Salanoa also admitted to investigators that he allowed Lefatia to leave his cell. Lefatia asked for permission to see his girlfriend in Fagatogo, and Salanoa said that, “out of an act of kindness,” he agreed to let Lefatia go but told him he had to be back in his cell by 10p.m. He further instructed another inmate to “do exactly what I say.” And that was, arrange Lefatia’s bed to “make it look like someone is in it.” Salanoa told investigators that “no bribe was involved.”

Pesaeli’s and Salanoa’s cases are still pending in High Court.