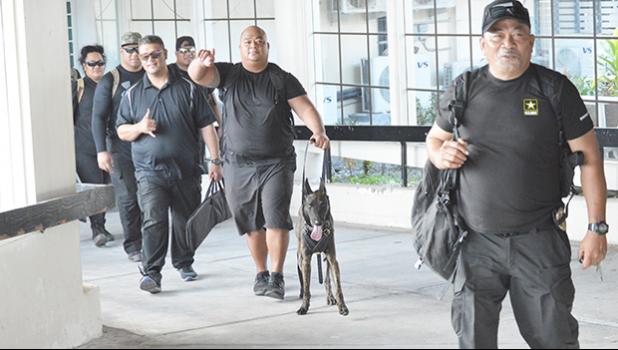 The warrants were to search residences, properties and the person of two separate individuals. Most of the police detectives involved in the police raid were armed.

The team left the Pago Pago International Airport around 7:30a.m via Samoa Airways and returned around 3p.m. Lt. Governor, Lemanu Peleti Mauga was among the group that traveled to Ofu.

Police detectives from the DPS Vice & Narcotics / K-9 Unit including drug-sniffing dog, Kaino upon returning from a raid in Ofu, Manu’a last Thursday afternoon where they executed two search warrants for illegal drugs and weapons. No arrests were made at the time. [photo by AF]

“I only went to Manu’a to visit the island,” Lemanu said with a smile on his face.

Police Commissioner, Le’i Sonny Thompson did not reply to Samoa News emails last Friday when asked about the police raid.

After a lot of angry comments by members of the community appeared on Social Media regarding the police raid, and the fact that several people from Manu’a wanted to understand more about the raid, Samoa News asked the Police Commissioner for an update regarding the raid.

However, Le’i continued to remain silent and did not offer any comments to Samoa News regarding the issue.

The team arrived in Ofu, Manu’a around 8:30p.m and immediately conducted their search, according to the search warrants. They searched the two residences included in the search warrants for drugs and weapons. The search then moved up to the mountains where live marijuana plants were discovered.

All items discovered during the raid were confiscated and transported by police to Tutuila where the haul were tested and photographed and handed over to the DPS evidence custodian.

A police detective was seen carrying a parcel wrapped in a black plastic bag with yellow tape when members of the DPS Vice & Narcotics/K-9 Units returned from Ofu, Manu’a after executing two search warrants looking for drugs and weapon last Thursday. No arrests were made at the time. [photo by AF]

Samoa News understands that there were suspects identified after police executed the raid, however, the team did not make any arrests or bring any suspects with them when they returned. Samoa News learned that after negotiations, the suspects agreed to turn themselves over to police for further interviews regarding the items allegedly found there.

Based on the drugs and weapons discovered during the raid, police believe they have enough evidence to charge the suspects, however, it’s not clear at this time when the suspects are going to turn themselves in to police.

A female police detective (left) was carrying a black plastic bag when members of the DPS Vice & Narcotics / K-9 Unit returned from a police raid in Ofu, Manu’a last Thursday afternoon. No arrests were made at the time. [photo by AF]

Before the team departed the Tafuna airport, word about the police raid was already spreading on social media and had reached people in Manu’a.

One person posted on her Facebook page, asking all Manu’a people in Tutuila to contact their families in Manu’a and inform them about the police raid that was coming their way.

According to the same Facebook post, it was 4 months ago when people of Manu’a suffered flooding due to heavy rains. However, when they requested ASG help, it took months for ASG to respond, but now, they (ASG) used the airplane to take police to search the properties of the people of Manu’a.

Another person posted on Facebook saying, “Sad how they are so quick to respond for this nonsense purpose but during a disaster they could barely get the help that the people [of Manu’a] need.”

Photo that angered Manu’a residents showing DPS officers from Tutuila posing on the Asaga Bridge with their weapons. The raid was on Facebook before it even happened. See story for details of raid. [photo: Manu’atele Community Facebook]

One comment stated, “This photo could have been taken without their firearms, to be respectful of our sacred scenery and island. The police in Manu’a do not even carry weapons.”