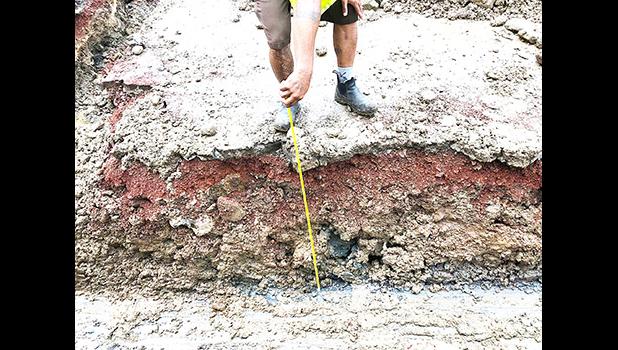 In partnership with the local government, COVID-19 Taskforce, and AS-EPA, the Honolulu District deployed three environmental representatives and a team of contractors from the Engineering Resource Remediation Group (ERRG) to perform soil contamination removal at 12 locations in Aua Village and Onesopopo Park.

In 2018, the AS-EPA requested USACE to initiate a rapid response to contamination encountered during infrastructure projects. The following year, through partnership with AS-EPA and the Aua Village Mayor and village council, USACE completed a site assessment.

“The current Aua Fuel Farm project will address the soil plumes and complete an additional investigation on the groundwater and surface water features,” said Daisy Pate, Honolulu District project manager for the Aua Fuel Farm project. “The contamination was encountered during attempts to install sanitary sewers into village homes, churches and schools,” said Pate. “The planned infrastructure improvements have been on hold until contamination can be addressed. The USACE project removal of the contaminated soil can allow infrastructure improvement for the eastern half of the island.”

AS-EPA represents the American Samoa Government and regulatory interests in this project and is assisting ERRG on a wide range of issues that includes facilitating right of entry permits from residents.

“I appreciate the AS-EPA and the Governor’s office for sponsoring USACE and our contractors for mobilization to start this project that was delayed by the COVID pandemic,” said Honolulu District Commander and District Engineer Lt. Col. Eric Marshal. “Executing the Formerly Used Defense Sites (FUDS) program is vitally important because it’s about public safety and environmental restoration. We look forward to other areas of partnership with the American Samoa government.”

During World War II, the U.S. Navy operated a fuel farm in Aua to store and supply diesel fuel for Navy ships.  Although the fuel farm was dismantled after the war, residents have since reported the presence of subsurface petroleum contamination in the village.

“I welcome the opportunity to work with the USACE and its contractor ERRG on the Aua project as it is very important that we continue to progress forward with the next project phase, especially when we and the whole world deal with the restrictions of the Coronavirus pandemic,” said AS-EPA Director Fa'amao O. Asalele Jr. “I would like to thank the USACE and ERRG for being persistent in ensuring that this important phase of the project proceeds forward despite the many challenges they had to overcome.”

The project work, which is expected to be complete by the end of 2021, includes excavation and thermal treatment of contaminated soil, backfill excavations and site restoration, groundwater and sediment monitoring, and surface water sampling to evaluate potential petroleum impacts to water. To date, ERRG has completed thermal treatment plan setup, groundwater sampling, a biological survey, and archaeological monitoring.

The start of the project was delayed due to travel and logistics challenges associated with the COVID-19 pandemic. The AS-EPA has sponsored USACE and contractor entry into the territory during the COVID pandemic for completion of the work.