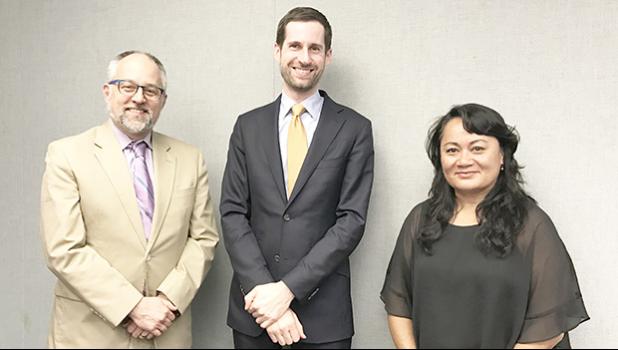 Neale is expected to be appointed the new top Medicaid official for the Trump Administration.

In the briefing, King-Young said she expressed to Neale the governor’s health care priority was to ensure that when the additional Affordable Care Act funding expires in 2019, that there be in place increased Medicaid funding to fully serve the people of American Samoa including the off-island program once reinstated.

According to a statement yesterday, King said she asked on behalf of the governor that the Trump Administration support the territories' request to the US Congress to lift the Medicaid cap and improve the territories’ FMAP (federal medicaid assistance percentage) matching percentage.

She said the Governors' of the territories during the previous administration were successful for the first time through territorial government effort, in getting these two provision's in the previous Administration's budget, unfortunately it did not pass in Congress.

Matt Salo, executive director of the National Association of Medicaid Directors (NAMD), accompanied King-Young to the briefing. “NAMD has included in its Congressional legislative agenda the request made by American Samoa to lift the cap and the FMAP matching percentage on behalf of the territories,” King-Young said via email before heading back to the territory.

In a prepared speech presented to last month’s federal Interagency Group on Insular Areas (IGIA) in Washington D.C., the governor called on the Trump Administration and Congress to be mindful that small economies such as those of American Samoa and other U.S. territories “cannot afford any reduction in Medicaid” funding.

The governor explained Medicaid is the primary health insurance coverage for the people of American Samoa - other then Tricare and Medicare. He also suggested lifting the Medicaid cap and the FMAP matching percentage. (See Samoa News edition Mar. 2 for details.)