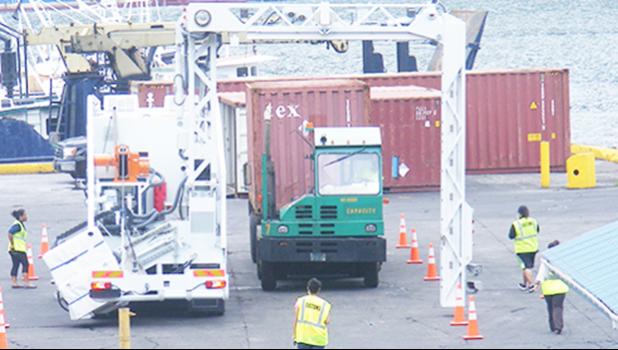 ASG Treasurer Uelinitone Tonumaipea believes the scanner project will be able to pay for itself in three years time, based on the fees already enacted into law last year, with the highest fee charged — $200 — is for the container scanner equipment.

Uelinitone along with Chief of Customs Moetulu’i Sipili Fuiava and other ASG officials appeared Tuesday before the Senate Budget and Appropriations hearing to discuss a couple of issues dealing with the large container scanner equipment at the main dock.

As previously reported by Samoa News and again explained by ASG officials at Tuesday’s hearing, the total cost of the rapi-scan project stands at $5.9 million for four pieces of scanning equipment, including the container scanner and mobile van that’s used at locations such as the inter island dock when the MV Lady Naomi comes into port.

Tonumaipe’a told the Senate committee that the $5.9 million contract for the project also includes two officials from off island, who are working with Customs, for a three-year period, to ensure that the scanners are operational. (The off island officials are from the company from which ASG purchased the scanner equipment.)

Moetulu’i said that seven Customs Agents are already certified to operate the scanner equipment at Port and the goal is to continue to train more staff to operate this equipment. He also told senators that the Fono has already approved legislation and it went into law late last year dealing with fees for the scanners. For example, a 20-foot container and over, is $200 per container, while a vehicle is $50.

Tonumaipe’a added that the employees certified to operate the scanners have all gone through the testing process, which includes a written test and a drug test — and they all passed including a background check.

He also told the committee when asked that based on the approved fee of $200 per container, it’s estimated about $2 million would be collected annually.

So after a three year period, about $6 million or more is estimated to be collected, Tonumaipe’a said, that means the scanners will pay for themselves in three years time (referring to the total cost of the scanner project of $5.9 million.)

However, Sen. Satele Galu Satele Sr. says he doesn’t believe the government would be able to collect its estimated $2 million a year in revenue from the container scanner.

However, Satele reiterated that he does not believe the government would be able to collect $2 million a year from the container scanner fee, while a large amount of money was spent on the rapi-scan project. Satele is a former chief of customs and served in the post several years ago.

A quick estimate by Samoa News: About $167,000 needs to be collected monthly to meet the Treasurer’s estimate, and at $200 per container scan, this means at least 834 containers per month or 10,008 containers per year.

Customers Office plans to make a public announcement when the container scanner goes into effect.

In later editions Samoa News will report on other issues on the scanner raised during hearing.