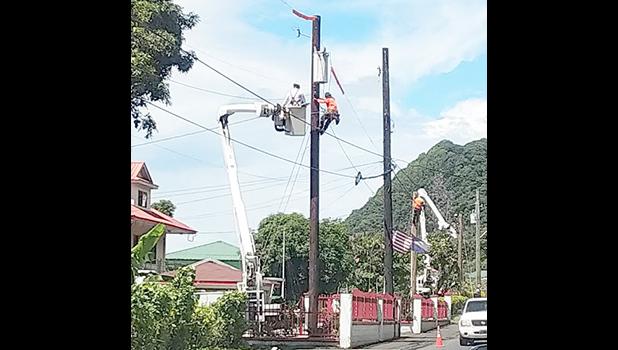 The press release notes the 2,000 illegal streetlights were detected last year when ASPA crews were installing the new LED lights and the illegal lights were installed over many years and not last year as earlier reported, according to ASPA.

In the report, Samoa News was quoting a statement made in the fono last week by Rep. Alumamalu Ale Filoiali’i, chair of the House American Samoa Power Authority (ASPA) Committee.

Alumamalu’s statement was in response to a complaint raised by Rep. Vailoata E. Amituana’i in the House about Fagaalu having no streetlights. Alumamalu said as quoted in the story, “According to a report from ASPA officials, as ASPA crews were on the road installing new streetlights in each village, Senators, Representatives and even family Sa’o of some villages approached them and instructed them to install extra streetlights to several locations that were not supposed to have a streetlight. As a result, some villages were unable to receive new streetlights because of the shortage.”

According to Alumamalu, “over 2,000 streetlights were illegally installed” due to these demands.

ASPA secured a Department of Interior grant in FY-2020 to replace all non-LED streetlights in territory. The program paid for a one-for-one replacement and official records revealed that there were 5,500 active streetlights in ASPA’s billing system. ASG pays for public lighting along main roads, secondary roads, while residents and businesses pay for street lights on private properties. ASPA planned to replace all 5,500 active streetlights and install 500 more along main and side roads for security.

The LED Streetlight Replacement Project started in July 2020 and after replacing close to 5,000 lights, it was determined that 3,000 more lights located along secondary roads and private properties needed to be replaced. Many of these lights were not on ASPA’s billing system, meaning no one was paying for them; hence the term “illegal streetlights”.

ASPA had to order 2,000 more lights to complete the project. When completed, ASPA will perform a full streetlight count so the number of streetlights in the field matches the number in its billing system.

In ending, ASPA sincerely thanked the public for their patience and support.