Ban on sea voyages and flights between 2Samoas remains in effect 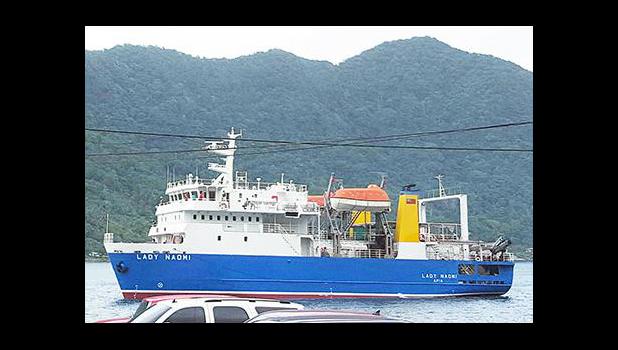 Holiday travel by cannery workers not happening, no cargo either
By
Fili Sagapolutele
fili@samoanews.com

Pago Pago, AMERICAN SAMOA — Gov. Lolo Matalasi Moliga has not lifted the ban on cargo voyages of the Samoa government-owned MV Lady Naomi between the two Samoas, while the suspension of flights remains in effect, according to ASG Coronavirus Task Force chairman Iulogologo Joseph Pereira.

When Samoa reported its first suspected COVID-19 case two weeks ago, the governor ordered the immediate suspension of all flights to and from Samoa, along with the weekly sail of the MV Lady Naomi — that usually arrives and departs Thursdays. And the order remains in effect until further notice.

The governor’s COVID-19 Eleventh Amended Declaration, effective for 34-days - from Dec. 1, 2020 to Jan. 3, 2021 — shows inter Samoa flights remain suspended but there was no mention of voyages from Samoa.

“The Governor has not lifted the ban on flights to and from Samoa including the Lady Naomi voyages,” was the response from Iulogologo, when asked if the ban is lifted for Lady Naomi voyages, since it’s not included in provision of the 11th Amended declaration.

The amended document maintains previous regulations on allowing cargo and fishing vessels to enter the Port of Pago Pago, with full compliance, with several local requirements, to “protect our supply lines, sustain our food security and to support the production capacity of our cannery.”

The suspension of ocean and air service between the two Samoas will have an impact on cannery workers, who usually head to Apia during the annual end of the year StarKist Samoa shutdown for maintenance. Some cannery workers had already planned since last month, to travel to Samoa.

“We are very sympathetic and recognize the desire of the cannery workers to return to Samoa for the holidays, but the situation in Samoa has now changed with confirmed Coronavirus cases, which heightens the risk for us here,” Iulogologo said. “The challenge is not attached to allowing the workers to travel to Samoa as we don't have a confirmed case. The risk is embedded in the return of these workers.”

He points out that Samoa does not test departing travelers “so we don't know if anyone of them have been infected.”

“Every returning cannery worker has to be tested and quarantined for 14 days. We don't have the capacity to quarantine these returning workers,” he explained. “This poses substantially increased costs for us in the backdrop of our efforts to repatriate out stranded residents for which we are seeking financial assistance from the federal sources.”

“While it is the humane option to allow cannery workers to return to Samoa for the holidays, the inordinate risk and the overwhelming financial and healthcare cost would render this option extremely unfeasible,” he noted.

According to the chairman, increasing the frequency of trips by Samoa Airways, Talofa Airways and the Lady Naomi to transport the cannery workers to and from Samoa “exponentially raises the risk for us.”

“We took a highly unpopular stance denying landing for the US Air Force flights into the Territory because of our great fear of an accidental transmission,” he said, referring to US Air Force’s three aircraft and 31 crew members that were denied landing this past weekend, for overnight in the territory before heading to Antarctica, with a stopover in New Zealand in support Operation Deep Freeze. (See Samoa News edition Dec. 1st for the denial landing story.)

“The Governor and the Lieutenant Governor since the onset of this COVID-19 Pandemic have had to make bold and unpopular decisions to protect the lives of 57,000 on island residents,” Iulogologo points out.

Many local residents usually send large shipments of holiday goods and especially food items — in bulk shipment — to family and friends in Apia, and vendors buy certain merchandise from Apia.

With the ban on cargo voyagers, Samoa News asked if the task force is looking at recommending to the governor to allow limited cargo service between the two Samoas for the holidays.

“We cannot control what transpires in Samoa…”  was the response from Iulologo who points out that ASG “continues to bear the cost of decontaminating all cargo which enters the territory.”

“At some point in the future, the vendors will have to bear this cost which means the cost of the goods to our people will be much higher,” he said. “We need to understand that we are living in unprecedented times and sacrifices are being made and will continue to be made to protect our lives.”

Asked as to what is the task force’s major concern at this point with Samoa having two confirmed cases, Iulogologo responded, “We don't have full information on the COVID-19 status in Samoa. We still have not received information on the Fesco Askold container vessel relative to those quarantined.”

Fesco Askold, with three of its 17 crew members who tested positive for COVID-19 departed Pago Pago on Nov. 18th en route back to the US with cargo loaded from American Samoa.

The vessel had arrived from Samoa on Nov. 8th and local virus tests came back positive for three of the crew members, who were then isolated on board the vessel while in port. Also none of the vessel’s crew — as required by local protocols — were allowed to disembark.