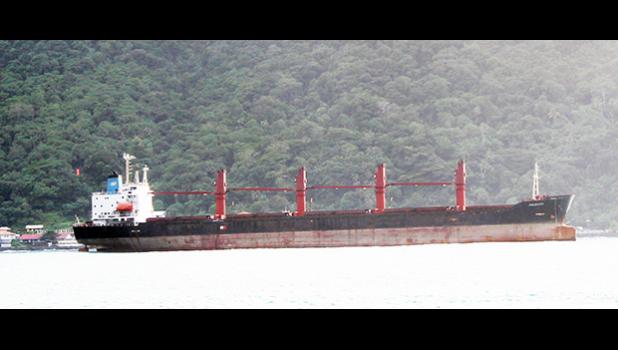 Pago Pago, AMERICAN SAMOA — A property claim has been filed at the federal court in New York City, New York against the North Korean cargo vessel, “Wise Honest” currently anchored in waters of the bay area in American Samoa.

The claim was filed Wednesday, by Cynthia and Frederick Warmbier, as individuals and as personal representatives of the Estate of Otto Warmbier — the couple’s deceased son.

Otto Warmbier, a University of Virginia student from Cincinnati, was sentenced by North Korea to 15 years of hard labor in early 2016 for allegedly stealing a propaganda poster. His parents say he was tortured and he died days after being returned to the United States in a vegetative state in June 2017.

The Wise Honest was seized by US authorities in April this year in Indonesia and towed to American Samoa in mid May. And it remains under authority of the US government, which claimed that the vessel was used by North Korea to violate international sanctions.

According to court documents, the Warmbiers obtained a default judgment at the federal court in Washington D.C. against North Korea early this year in the amount of $501.14 million.

“This judgment resulted from North Korea’s hostage taking, illegal detention, torture and extrajudicial killing of Cindy and Fred’s young son, Otto Warmbier, and the severe mental anguish and extreme emotional distress that North Korea caused the Warmbiers to suffer as a result,” the filings said.

It also says that in granting the judgment, US District Court Chief Judge Beryl A. Howell noted that the Warmbiers “experienced North Korea’s brutality first-hand when North Korea seized their son to use as a pawn in that totalitarian state’s global shenanigans and face-off with the United States.”

In April this year, Howell authorized the Warmbiers to enforce their judgment against North Korea, according to the court filings, which includes the enforcement order from Howell.

And despite receiving all required notices and service, North Korea never entered an appearance in, defended against, or engaged in any settlement discussions related to the civil action against it.

Hence, the Warmbiers are left to chase down the assets of North Korea to recover what they can for the torture and death of their son at the hands of North Korea’s dictator, who with “his cronies, show[s] no regard for human life,” according to filings.

In conclusion, court documents say the Warmbiers respectfully “claim a right, title and interest to the Defendant [North Korea] Property.”