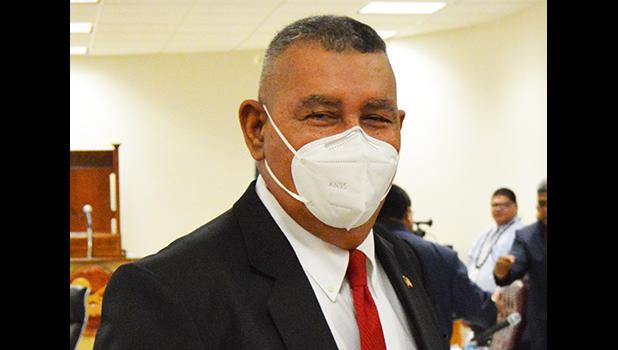 Pago Pago, AMERICAN SAMOA — The Aua Representative Faimealelei Anthony Fu’e Allen who once again is calling himself a “big man” has criticized the media for not reporting what he actually said in the House Chamber two weeks ago when he brought up the issue about lawmakers needing to receive their vaccinations all together at one time instead of having it one by one.

Faimealelei’s comments caused disappointment and anger among many members of the community after the Samoa News article was shared on social media and reviewed by many readers last week.

Faimealelei raised his voice while expressing his disappointment to members of the media who were present in the House chamber during last Friday’s Session regarding this issue.

Before he made his comments to the media, he requested the Speaker of the House to allow him to speak directly to those members of the media who were present.

Faimealelei said the media was not doing its job — that is reporting facts on every issue representatives raise and discuss in the House chamber everyday. Instead, according to the Aua representative, not only does the media twist the message when they report it, but they also add more words which can change the whole message. As a result, members of the public take the messages in a negative way.

He then brought the Speaker of the House, Savali Talavou Ale up-to-date on the issue he raised in the House chamber on the day Savali was absent due to a church meeting.

He stated that on that day, he requested Vice Speaker, Fetu Fetui Jr, who led the House Session that morning to find a way to have representatives vaccinated all together at one time, instead of letting them have their vaccinations one by one.

“I have the utmost respect because I respect everyone but I never said such things that lawmaker should be treated differently from everyone else” Faimealelei said in a loud voice.

“The camera is here (referring to the video camera used by the House employees to record the session) so as honorable representatives were also present on that day.”

Faimealelei told the media that if they look at the list provided by the CDC (Center for Disease Control), you will find a list of people who should be vaccinated first  — such as first responders, medical care staff and also lawmakers.

“Write it down what I said and put it on your news,” Faimealelei instructed the media, adding that he never said any word that lawmakers must receive special treatment and must be given first priority for vaccinations in a special way and place.

He then reminded the media that while they have a right through freedom of the press, he himself also has a right to freedom of speech. Faimealelei warned the media to be very careful because this is a defamation of character. He further stated that there are House Rules that need to be followed and if not, consequences will follow.

One comment on social media read, “Uh, if first responders and everyone else sits outside, what makes them so special. There must be grandpas and grandmas older than him sitting in the tent and he wants special treatments?

Another comment said, “Special treatment? What are they Handicapped? Only handicapped people need special attention.”

In the story, Faimealelei said that faipule should receive special treatment and must be given first priority for vaccinations in a special place instead of sitting outside in the sun under the tent with members of the public waiting to be vaccinated.

He believes that lawmakers must be treated differently from members of the public because they are leaders of the government and they deserve respect.

The Vice Speaker who led the House Session last Friday disagreed. He said that lawmakers are servants and their call is to serve the people not to be served by the people.

During the House Health Committee hearing with members of the COVID-19 Task Force, Faimealelei raised the issue again. He said that the Task Force must set up a special time for representatives and senators to be vaccinated.

Motusa T. Nua, Acting director of the Department of Public Health and a member of the task force told members of the committee that the door is open for anyone who wants to be vaccinated. He further stated that senators had already received their first dose of the vaccine the previous Monday.