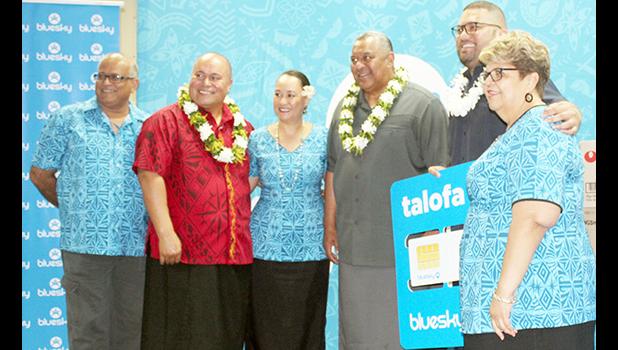 Bluesky’s newly appointed Chief Executive Officer, Justin Tuiasosopo made the official announcement and presentation of the additional donation to Gov. Lemanu Peleti Palepoi Sialega Mauga during a news conference this past Friday at the company’s main office on the second-floor of the Laufou Shopping Center.

Gov. Lemanu Peleti Palepoi Sialega Mauga (left) posed for a media photo with Bluesky Communications chief executive officer, Justin Tuiasosopo (right) holding a huge facsimile of a SIM card during a Bluesky news conference last Friday at the company’s main office at the Laufou Shopping Center, where Bluesky announced its donation of $70,000 total value of services to ASG for repatriated residents, who will be quarantined at Tradewinds Hotel. Among the donated services is 800 SIM cards preloaded with 500 local minutes and data credit — ready to go to the returning residents. [photo: FS]

Speaking in Samoan, Tuiasosopo said the company’s donation is in support of the government’s preparation for the first of five repatriation flights being planned. He hopes that the donation will bring comfort and help lighten the burden on repatriated passengers as well as the government.

“We are grateful for this opportunity to assist our government with their efforts to repatriate many of our residents who have not been home since March 2020 when the borders closed,” said Tuiasosopo in a company press release after the donation presentation. “We look forward to welcoming our returning residents and look forward to serving them and the community.”

Lemanu launched the repatriation donation drive through a memorandum issued Jan. 25th, coordinating with the privates sector, community based groups and others, saying that the donation drive aims to assemble care packages that will provide comfort and relief during the final quarantine phase of repatriation efforts.

This Samoa News photo shows some of the cases of donated items such as chips/cookies and personal hygiene products from Bluesky Communications that were presented to Gov. Lemanu Peleti Palepoi Sialega Mauga during a news conference last Friday at the company’s main office at the Laufou Shopping Center. The donation is to help the government with its repatriation of American Samoa residents stranded off island and are returning home and being quarantined at Tradewinds Hotel. [photo: FS]

Personal hygiene products such as shampoo, conditioner, soap/body wash, toothpaste, toothbrush, feminine products, etc, are among the items needed for the care packages. Also on the list were chips/cookies.

Aside from donating cases of essential items specially requested for the donation drive, which ended last Saturday, Bluesky joined two other local businesses — Sadie’s by the Sea hotel and Tool Shop Tafuna — by offering their store locations as drop sites.

Tuiasosopo, at the news conference, said that the Bluesky tech team is preparing to boost internet speed at Tradewinds for repatriated passengers, so they can stay connected with family members and others during the quarantine period.

In accepting the donation, Lemanu — speaking on behalf of Lt. Gov. Talauega Eleasalo Va’alele Ale, the government and the people of American Samoa — expressed appreciation to Bluesky for the donation, which the governor says is a major one that will bring some relief to the  government and residents in preparation for the returning repatriated passengers who have been stranded off island for a long time, due to the ban on travel put in place to protect the territory from the spread of the pandemic.

The governor publicly congratulated Bluesky’s new CEO and offered the government blessing to Tuiasosopo. Lemanu acknowledged Bluesky’s workforce including Customer Service manager, Sherry Sele — who offered opening remarks at the start of the news conference — for their role in the donation.

Lemanu also thanked Bluesky for their service to the public through solid telecommunication service not only locally but also connecting the territory to the outside world. He said such service must continue and cannot be stopped because in today’s world its telecommunications — through internet and other modern technology — that keeps people connected. He said that there is always a chance and opportunity for the government to work together in anything that Bluesky needs from ASG.