Candidates grapple with questions about health care at CofC forum 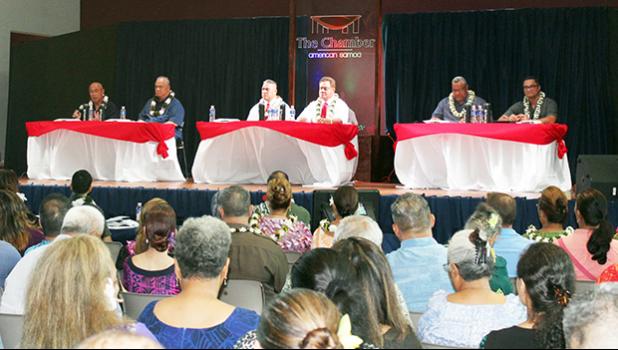 To build or not to build a new hospital and how to attract medical professionals
By
Fili Sagapolutele
fili@samoanews.com

Pago Pago, AMERICAN SAMOA — Healthcare infrastructure was one of the issues raised in one segment of last week’s American Samoa Chamber of Commerce gubernatorial forum. The teams were asked for their take on whether to build a new hospital or repair the current one — and also how to increase trained medical staff at LBJ Medical Center.

Issues and questions were submitted by Chamber members and the forum provided those in attendance at the ASCC Multi purpose center the chance to hear from three out of the five gubernatorial teams.

“It is widely accepted that LBJ Medical Center is in need of significant rehabilitation or replacement. What is your plan to repair or replace LBJ?” was the healthcare question.

The question was first directed to the I’aulualo/Tapaau team with Tapaau responding. He first noted that “we are in COVID-19 times” and the hospital’s work now is to prepare the territory in the event of a confirmed case.

He pointed to a study last year by the US Army Corps of Engineers commissioned by the US Interior Department, assessing the current hospital and providing an estimated cost of renovating and modernizing the current facility, constructing a new facility, and whether a renovated facility would have sufficient capacity to meet American Samoa’s needs.

Instead of repairing the current facility, the assessment report says ASG prefers a new multi-story hospital at the current LBJ location, with an estimated cost of $750 million to $900 million. (See Samoa News edition July 24, 2019.)

Tapaau told the audience that building a new hospital would provide the “the kind of quality facility that you would have” in the U.S.

“I’aulualo and I have to look at innovative ways to provide health care in American Samoa. That’s why in our [healthcare] platform, we proposed that we look at non-profit models, in the same way hospitals off island work with universities or other private foundations,” Tapaau explained. “Using a non-profit model, gives us eligibility to access those kinds of funds.”

“We cannot simply depend on local funds, unless we built a data center that I’aulualo has proposed or we can find other sources of revenue,” he said.

When asked by the moderator for his response, Nua pointed out that this is a long standing issue, which has been argued in the past but if the Nua/Satele team is elected “we will build a new hospital, that will bring in new good physicians.”

In his response, Lemanu said the question can also be answered from another point of view, pointing out that perhaps the answer is not the hospital but the medical professionals.

American Samoa needs to take a careful look at staffing of professionals, he said.

While a new hospital can be built, Lemanu said the challenge is to entice American Samoa’s young generation to return to American Samoa to work.

And how can that be done, he asked? And he answered, that by improving schools and aligning the ASG scholarship program with what’s needed by the government to serve the public. Furthermore, improving pay scales for nurses and doctors would be an incentive for American Samoans to return home to work.

Adding on to Tapaau’s response, I’aulualo pointed out that the “real problem is that we don’t have enough money. We have a health care facility that costs $150 million to run but the government is only giving them a $50 million budget.”

“That’s the problem now. It doesn’t matter, how we twist it. The problem is we don’t have enough money to provide good and sound health care to our people,” I’aulualo said. “Tapaau and I have a plan for that.”

Number one, as also stated in the team’s healthcare platform, already made public and published in Samoa News in the past, is that “we can convert it to a non-profit organization, because if we tap into foundation money, that’s another source of money. We can continue to work with the federal government, on the existing funding sources that we have right now.”

Nua, who was first asked for his response, said that’s why the team responded earlier about building a new hospital. Nua said a new hospital means bringing in good doctors with expertise in a wide range of medical fields.

According to Nua, these doctors are then able to claim Medicare, which is the only way for the hospital to get additional money. He explained that building a new hospital under a cost-share with the federal government can be done under a 5-year plan, in which American Samoa is able to provide it’s 25% cost-share through the five-year plan.

Talauega pointed out that he and Lemanu “do not object to building a new hospital. We think we should look at the entire health care system and that is why health care is number one in our [campaign] platform as we roll it out. Health is important. We need to be healthy in order to enjoy our lives.”

The Lemanu/Talauega healthcare platform has also been made public in the past and published in Samoa.  Talauega explained one of the three areas the team’s platform focuses on, is “improving the workforce.”

“Workforce development, which starts from a young age, teaching students to learn math, science. We need to have an active recruitment. Start with students, people from American Samoa who are now highly regarded medical doctors in California, Hawaii. We need to bring them back.

“Building the hospital, building infrastructure — of course that is part of it,” he said. “The third part of our development is helping with innovation — using technology to improve our health care system. And I invite you to observe our platform as it rolls out.”

For his rebuttal comments, Tapaau noted that American Samoa cannot offer competitive salaries to doctors or nurses or other medical professionals from off island.

“Our appeal to them would have to be humanitarian, to please come and help us,” he said.

As to the issue of trained medical staff, Tapaau said, “we cannot take a short term look on how we can get more doctors. We have to take a long term approach.” he said. “We have to even start at elementary schools. We have to build science labs to interest more students in science.”

Furthermore, “our entire culture has to be interested in health, in prevention, in addressing childhood obesity. The whole health care system has to work together.”

“So we need to be honest about these kinds of problems and we can’t just bring band-aid solutions to try to train our youth,” Tapaau declared. “Becoming a medical doctor takes a dream. We have to give our young people the dreams to become doctors.”

Samoa News will report in later edition on other issues from the forum.