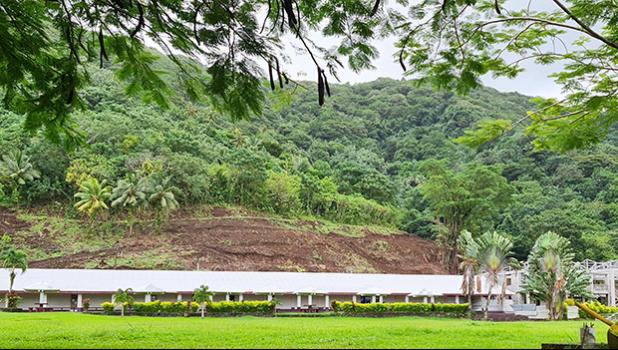 This was confirmed by Director of Public Works, Faleosina Voigt during a hearing before the House of Representatives last week.

“And we plan to convert the current trade school, Nu’uuli Vocation Technical High School to an academic school and this will alleviate some students from Tafuna High School (THS) to assist with overcrowding of the classrooms,” said the DPW director.

At the same time the government plans to construct a new building at THS to house the JROTC.

The new DOE project behind ASCC has been a subject of complaints by the public given the excavation work for the new trade school was conducted without a land use permit.

This was revealed during a recent PNRS meeting where attendees questioned why this specific project proceeded without a land use permit.

On September 21, 2022 the Project Notification and Review System Board met and this project was on the agenda under “ASDOEc/o Samasoni Asaeli proposal for demolition and excavation, Mapusaga; 22-9219-ASG.

As reported by Samoa News, in October, the Lemanu and Talauega Administration’s Chief of Staff, Loa Tauapa’i Tuimavave Mulipola expressed “disappointment” that government departments are not “abiding by laws and policies” when it comes to steps taken before implementing any government projects.

Loa in an interview with Samoa News said the Government should strive to follow their own policies — “…there shouldn’t be any difference.

“There is only one law for everyone, including the government if they failed to follow due process … then that department should take the blame,” he said.

The Chief of Staff said these issues are addressed by the governor and all the departments are urged to uphold laws in place for projects.

“The directors all need to understand that they need get the permits in place before any project, it’s not that hard,” he said.