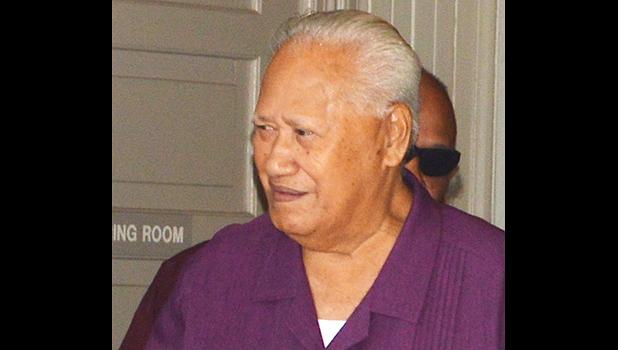 Pago Pago, AMERICAN SAMOA — The Lands and Titles Division of the High Court has taken under advisement the battle between the Pago Pago Village Council (PPVC) and High Talking Chief Tuaolo Meko Aiumu, after the court heard statements from several PPVC members who testified during a hearing yesterday morning.

A continuance has been scheduled for April 15.

Yesterday's proceeding was the third hearing for this case.

For that reason, Tuaolo, through his attorney, Togiola T. A. Tulafono filed a petition asking the court for a preliminary relief injunction to stop the PPVC from continuing the process of delisting from the land lease they submitted to the court. Charles Alailima is the attorney for PPVC.

When the matter was called, Togiola asked for a permanent injunction to stop the PPVC from withholding money that his client is entitled to receive under the National Park lease agreement that initially started back in 1990.

Togiola told the court that Tuaolo is one of the 12 families entitled to monetary shares; however, the Tuaolo shares ceased when he was removed from the PPVC.

Togiola argued that PPVC does not have the authority to stop his client from receiving his shares from the National Park lease because it was an agreement that was done years ago between the National Park and the PPVC, and the list of the families entitled to the shares was approved by the court.

Alailima did not agree however. He said the PPVC has the authority to make changes to the list, and to determine who should be entitled to receive the money from the National Park rental. Alailima said it was the court who gave PPVC this authority, meaning the PPVC has jurisdiction over the matter.

Before counsel Togiola called his witness to the stand, Chief Justice Michael Kruse advised both parties that the court is only interested in hearing issues that pertain to National Park Rules, which the court has jurisdiction over — and not what is happening inside the PPVC.

“What ever happens in Pago Pago stays in Pago Pago, this court has no jurisdiction" over those issues. The only thing that matters to the court, is the "Property Right issue regarding the National Park Rules," Kruse said.

He also reminded both parties of the preliminary injunction issued by the court during the first hearing, and that the status quo will remain in effect until further order of the court.

Tuaolo, n his testimony on the witness stand, said his family was among the 12 who receive shares from the National Park every year under a lease agreement. However, he stopped getting his shares after he was removed from the PPVC without any solid reason.

He said he was told that the list of families was changed by the PPVC, and he was not present at the meeting when the issue was discussed.

According to Pulu’s testimony, only “standing” matai are eligible to receive shares from the lease, not all of the matai in the PPVC. The standing matai, he continued, are those who are included in the village’s salutation.

Pulu also told the court that he has nothing to do with the matter between Tuaolo and the PPVC because he was not present during the village meeting where the matter of removing Tuaolo from the list was discussed.

PC Mauga in his testimony told the court that despite the disagreement between the PPVC and Tuaolo, there was a unanimous decision by the village — him included — during three different meetings that if Tuaolo wanted to come back to the village council, he’s more than welcome to be a part of the PPVC, and the door is still open to him.

“As you are all aware, I’m the Secretary of the Office of the Samoan Affairs and this matter before the court was not something big to our village. We all make mistakes, but if we consider our FaaSamoa and the way the Samoan matai fixes differences inside our villages, we know that we can fix any problem in our Samoan way, including respect and love,” Mauga said.

Tuaolo’s attorney asked Mauga to elaborate on his statement so the court can understand.

“Did you say that if Tuaolo wanted to come back to the PPVC, he has to bring food, fine mats and money?” Togiola asked Mauga.

Mauga replied with a smile on his face, “Togiola, let me answer your question using a phrase from the Bible. Jesus taught us that He wants mercy, not sacrifice.”

Togiola did not rest asking another question: “Did you practice what Jesus teaches us about mercy inside your village?”

Mauga was about to answer but Kruse intervened and told Togiola that his question was not relevant to the issue before the court.

According to some who claim to have inside knowledge of the situation, the battle that started with the church did not end there, but continued to spill over into the village, and Mauga allegedly took matters into his own hands; making the decision to remove the title of County Chief from Tuaolo without any solid grounds to support the decision.

Samoa News was present during the Eastern District meeting in December 2016 at the Mauga guest house in Pago Pago, where Mauga kicked Tuaolo out of the meeting by instructing him to leave the premises because he was no long considered a matai of the PPVC.

Before he left the meeting, Tuaolo responded by telling Mauga that he has no authority to kick him out of the meeting, but out of respect and wanting to keep the peace, he complied.