Census resumes in American Samoa: “I HAVE BEEN COUNTED” 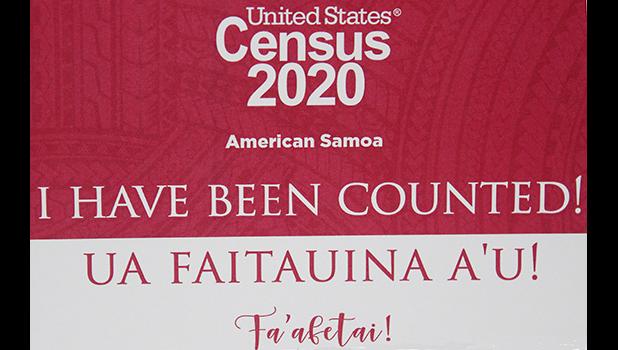 Pago Pago, AMERICAN SAMOA — This photo shows a mid-size placard that a Samoa News staff member was given Tuesday night, by a Census enumerator showing that the staff/ resident (who is also head of household) has been counted for the 2020 Census of American Samoa.

The placard — which includes a specific number of the household already counted — is presented to the resident, or head of household after the household goes through the process of answering a wide range of questions, which were read/ presented by the enumerator.

Samoa News has asked the public to be patient with enumerators, going through the questions to ensure accurate information is taken.

And there is concern from several ASG officials of dogs at family homes, making it a bit difficult to carry out this important task in counting the local population and they ask families to look out for the enumerators, who will have their ID badge to identify themselves.

Because of COVID-19 restrictions, local census count was postponed and the Commerce Department, the local agency overseeing the census, needed to present a plan to the governor, who approved it in order for the counting to resume.

Responding to Samoa News inquiries, Commerce director Fuiavailili Keniseli Lafaele said yesterday that enumeration resumed Monday this week and there are about 264 field workers in total including enumerators, crew leaders and crew leader assistants involved in the 2020 census.

“We need everybody's assistance in getting every single person in American Samoa counted,” he emphasized to the public. We need an accurate count for several good reasons, one of which is the fact that federal programs or funding more often than not, is a function of our total population.”

“Secondly, government policymakers and business owners depend on an accurate population count so social, educational and health policies or business plans are appropriately designed respectively,” he added.

In preparation for the resumption of the census count, the local Census Office carried out public awareness programs on KVZK-TV where local Census manager Meleisea Vai Filiga points out that members of households who are currently stuck off island because of the discontinuation of flights due to the coronavirus are to be included in the people count even though they are not physically in the territory.

Because of the current existing COVID-19 emergency declaration Census officials suggested designating an area where the questioning can be done and also to keep social distancing protocol at all times.

According to the 2010 Census data, the total population of American Samoa was 55,519.

“The results of the 2020 Census are critically important because lawmakers, business owners, teachers, and many others use census data to provide daily services, products, and support for you and your community,” according to a message posted on the US Census Bureau website page about American Samoa.