Central Dist. mass vax puts shots in the arms of 3,000+ — including kids 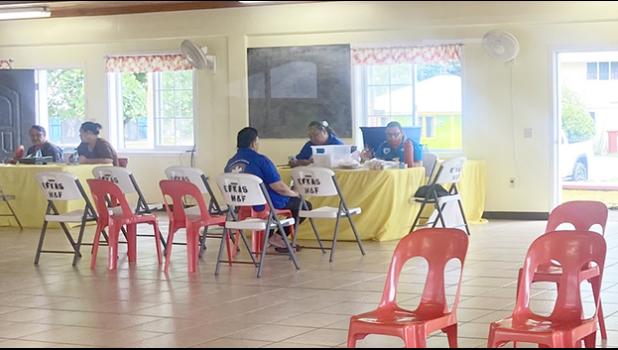 Many residents compliment staff on helpfulness
By
Fili Sagapolutele
fili@samoanews.com

Pago Pago, AMERICAN SAMOA — Just over 1,100 shots were administered for COVID-19 at sixteen sites during the second-day of the government mass vaccination drive last Thursday for the Central District, as ASG prepares for the Western District this week, according to preliminary Health Department data.

“We called the DoH 219 hotline and were told that I could take my family members to a nearby site that was open from 12noon to 4p.m since I was not able to get my family to the 8a.m. to 12noon clinic. And we didn’t have any problems,” said Nu’uuli a resident, who got the booster shot.

A working mother, said she didn’t make it to her young-daughter’s school to be present with the signed consent form, but DoH gave her information on one of the afternoon vaccination sites where she got her booster shot, while her daughter, who is between 5 and 11 years old, received the first dose and the $100 cash incentive.

“I’m glad DoH is able to accommodate working parents, by using other sites instead of a designated one, to ensure we all get protect,” said the mother, who works in the private sector.

Samoa News received similar praise from a few other parents on how DoH and ASG were very accommodating to working parents, especially those who work in the private sector.

According to DoH preliminary data, a total of 1,177 shots were administered on day-two from all sixteen sites. The highest number of shots — totaling 155 — were administered at the Tuana’itau Guest House vaccination site in Pavaiai; follow by Soli’ai Guest House at Nu’uuli Uta — which opened from 12noon to 4p.m. — with 133 shots administered there.

Soli’ai’s Guest House at Nu’uuli Tai was open from 8a.m to 11a.m where 38 shots were administered.

Another busy vaccination site last Thursday was at the Samoa Baptist Academy where 124 shots were administered.

So far, Health and ASG officials are pleased with the turnout during the two-days of mass vaccination.

The Western District mass vaccination gets underway this week on Dec. 8th and Dec. 9th at designated sites. Parents and others who have questions are encouraged to attend two informational meetings — especially those individuals with concerns over vaccination of children ages 5 to 11 years old.

The first informational meeting is today, Dec. 6th at Fa’asao Marist High School campus and the second one is tomorrow, Tuesday, Dec. 7th at the Leone Catholic Church Hall. Both meetings start at 5p.m.

For more information as well as the specific vaccination sites for the Western District call DoH hotline at 219. DoH also provides updates on its Facebook page.