Certified copy of local birth certificate can be ordered online 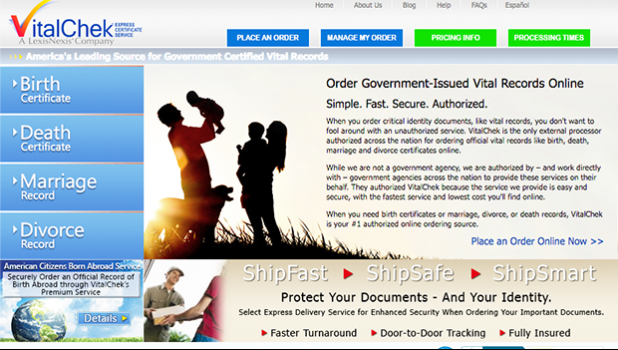 American Samoans residing abroad and wanting a certified copy of their birth certificate from the Office of Vital Statistics, can order it online, through VitalChek Express Certificate Service, which touts itself as the only external processor authorized across the nation for ordering official vital records, such as a birth certificate, online (vitalchek.com).]

Samoa News is aware of at least two American Samoans living in the territory, who used the online service to order their birth certificates last year — one of them received it while the other was told to bring certain verification from the court because of an amendment to the birth certificate.

Ordering a birth certificate online is one of the improvements at the Vital Statistics Office cited by Gov. Lolo Matalasi Moliga in his official written State of the Territory Address, through the Comprehensive Report distributed to lawmakers and others.

In the past years, Lolo says Vital Statistics fielded many public complaints for failing to process requests for vital records in a timely manner as well as showcasing poor quality in customer service.

In addition, some vital records were only issued on certain days of the week and this often posed major inconvenience to the general public. (Samoa News notes lawmakers were among the many who complained.)

By 2013, the governor said the local Homeland Security Department, which oversees Vital Statistics, instituted several policy changes to improve Vital Statistics operation. For example, the public can now request their vital records on any day of the week — except for marriage certificates, which are issued on a set day to comply with court procedures.

A check of VitalChek online shows for example, an American Samoa birth certificate is $22.75 and this cost includes the Agency Certificate Fee and the VitalChek processing fee. The cost however does not including shipping the record to the requester or any expedited fees.

To try out the online system, this reporter ordered her birth certificate yesterday — but didn’t process it. The cost: $10 for the agency (ASDHS) birth certificate fee and $12.75 for VitalChek processing fee, totaling $22.75 — but this does not include the shipping fee. Regular mail deliver is 49 cents but Vital Chek suggested a more secure shipping method. Payment method includes debit or credit cards.

A link to VitalChek is on the official ASG website: americansamoa.gov

In his address, Lolo also said that a new database system has been implemented at Vital Statistics to replace its “primitive filing system” and this new electronic system now provides the agency more efficiency in storing and accessing of all of its vital records instead of skimming through bulky binders and hard copies.

For the past four years, Vital Statistics has entered more than 10,000 vital records into its new database system, the governor said.