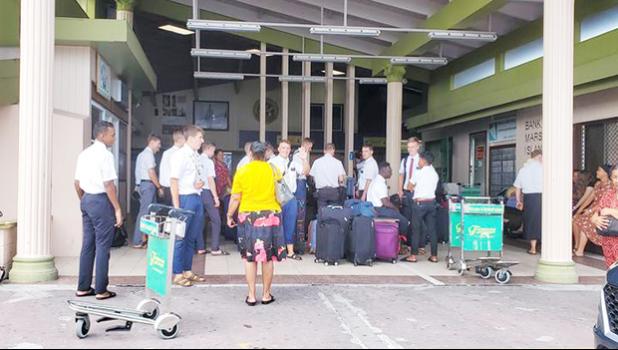 Pago Pago, AMERICAN SAMOA — At last Friday’s COVID-19 briefing, Gov. Lolo Matalasi Moliga announced that he has granted approval of a charter flight to evacuate from the territory Church of Jesus Christ of the Latter Day Saints missionaries who remain on island since the closure of American Samoa’s borders.

Lolo explained that he has approved the Church’s request for an aircraft to enter American Samoa to uplift close to 20 missionaries currently on island, with the condition and promise by the Church that no-one on that aircraft, including the crew, will deplane, when the aircraft arrives.

The aircraft will park on the tarmac while missionary workers walk out to the plane, he said.

Responding to follow-up questions, ASG’s COVID-19 Task Force chairman, Iulogologo Joseph Pereira, who is also the governor’s executive assistant, said yesterday that, “we don't have a date as of yet” when the plane will arrive on island.

“Church of Jesus Christ’s Elder Vince Haleck will provide that information when available. He indicated that the flight will come in some time this week,” said Iulogologo, and explained that there are 17 missionaries on island.

He reiterated that the plane will land to pick up the missionaries and depart again, and “no one will deplane.”

US media outlets reported several weeks ago that the Church has recalled back to the US and Canada its missionaries working around the world, due to the coronavirus outbreak.

Flights on the inter Samoa route are suspended after both American Samoa and Samoa closed its borders, and Hawaiian Airlines has suspended flights between Honolulu and Pago Pago for 30-days following Lolo’s request.

Regarding Manu’a residents complaining about the charter flights overseen by ASG and operated by the Samoa government owned Samoa Airways, are not taking them, the governor explained that the flights for Manu’a, based on the request to the Samoa government is to “address emergency issues” including medical evacuation, while also limiting the movement of residents between the islands, to combat the coronavirus.

He emphasized that Manu’a residents should stay home and observe current restrictions and not travel back and forth between the islands. (See yesterday’s Samoa News edition on explanation regarding the Manu’a flights.)