“Climate Change in Am Samoa” report points to 10 key issues 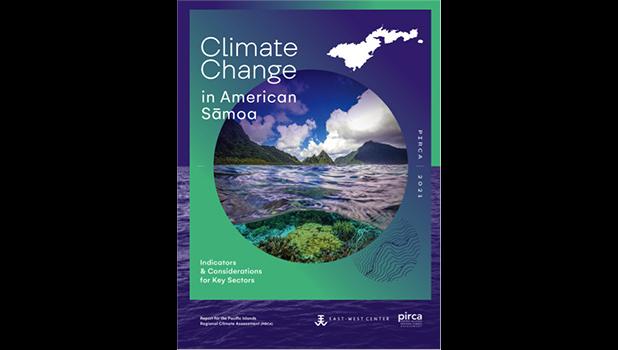 Pago Pago, AMERICAN SAMOA — The “Climate Change in American Samoa” report released recently by the East-West Center in Honolulu summarized ten “key issues for managers and policymakers” to better understand the implications of climate variability and change for the territory.

In a news release, East West Center points out that human health risks, stronger cyclones, coral reef death, and coastal flooding are among the major challenges detailed in a new report on climate change in American Samoa.

Among the “Key issues for Managers and Policymakers” cited in the report, is “Increasing air temperatures” — saying that hot days have increased while the frequency of cool nights have decreased in the territory.

Another key issue explained in the report is “equality considerations”, saying that climate change is expected to disrupt many aspects of life in American Samoa and some groups will likely be affected disproportionately.

“Those who are already vulnerable, such as children, elderly people, people with existing medical conditions and low-income communities as well as those villages located in low-lying coastal or rural areas, are at greater risk from extreme weather,” the report states. “Traditional systems of land and marine tenure complicate relocation out of ancestral areas and communities do not want to be separate from their lands and waters.”

Also a key issue in the report is “threats to community health”, with the report saying that changes in rainfall and drying patterns are likely to lead to increased mosquito populations, which can increase communities’ exposure to mosquito-born illnesses such as Zika, chikungunya, and lymphatic filariasis.

“These diseases disproportionately affect people living without sunscreens on their windows, or without the means to seal their houses and near objects that collect rainwater,” it points out.

(Samoa News notes that the territory had in the past years been faced with the spread of mosquito-born illnesses, as cited in the report.)

Another key issue is “more extreme rainfall and flooding”. It states that extreme rainfall events are projected to become more frequent and intense for American Samoa, increasing runoff and the rise of flooding.

Also cited as a key issue, is “uncertain rainfall amounts”, and the report explains that there is uncertainty in how total rainfall will change this century in the territory and the majority of climate change models project only small changes in future rainfall amount, although some project changes of up to 20% in either direction. “A wetter, drier, or unchanged future climate is possible,” it says.

The report also points to “coral reef bleaching and loss” — another key issue. It explains that oceans are warming, causing coral reef bleaching to become more frequent and severe. “Coral reefs and ocean ecosystems contribute millions of dollars annually to American Samoa’s economy and provide natural protection from floods and storms,” it says.

“Risks to fresh water” is another issue cited in the report, where it explains that hotter temperatures increase the demand for water and decrease the fresh water available. Additionally, sea level rise threatens many groundwater systems in low-elevation areas.

“Increasing knowledge and awareness among community members about how water system may be impacted, and communication among agencies and sectors that manage water, have the potential to boost resilience to climate change and other shocks and stressors,” the report said.

There is also the “threats to ecosystems and biodiversity”, which is another key issue in the report. Changes to temperature, rainfall, and storminess promote the spread of invasive species and reduce the ability of marine and terrestrial habitats to support rare and protected species. “Measures that enhance biodiversity and improve ecosystem resilience can help communities to adapt,” the report suggests.

The other two key issues for managers and policymakers cited in the report:

•    Sea level rise — global and local sea level rise has accelerated. Land subsidence — the sinking of Earth’s surface — from a major earthquake in 2009 compounds the effects of sea level rise and associated coastal erosion; and

•    Threats to infrastructure — more frequent and severe coastal flooding and increased coastal erosion are affecting coastal properties and infrastructures. And these issues will be amplified. in the coming decades as sea level rise continues.